"At this time, terror organizations, especially the Islamic State, are highly motivated to carry out terrorist attacks all over the world." 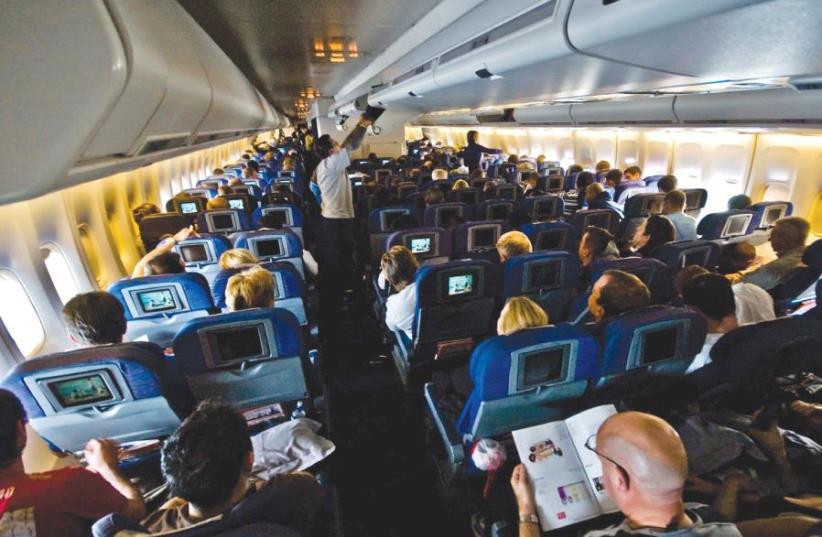 Passengers sitting inside an airplane [illustrative]
(photo credit: Wikimedia Commons)
Advertisement
Ahead of the mass exodus of Israelis looking to exploit remaining days of annual leave during the High Holy Days, the National Security Council’s Counterterrorism Bureau has issued a number of travel warnings for those seeking to travel abroad.The travel warnings, which the bureau said are based on intelligence reports and credible information, were issued due to the real likelihood of threats against Israeli and Jewish targets across the world. Most of the travel warnings relate to Arab and “enemy” countries.Most notable, however, is the bureau’s warnings in relation to visiting Western and Northern Europe.In the latest warnings, Western and Northern Europe join a list of countries threatened by the Islamic State’s “war of survival.” The others are immediate neighbors of Iraq and Syria: Turkey, Jordan and Egypt.The bureau warns Israeli tourists to stay vigilant in these countries, particularly in areas of high foot traffic during the festivals, including sports venues, museums, shopping areas, hotels and places of worship.“At this time, terror organizations, especially the Islamic State, are highly motivated to carry out terrorist attacks all over the world,” warned the bureau.
Police patrol the area after a van crashed into pedestrians near the Las Ramblas avenue in central Barcelona, Spain August 17, 2017 (Reuters)
Methods of attack used by Islamic State in the last 12 months and emphasized in the warning to Israeli travelers include stabbing, car ramming, shooting and the detonation of explosive devices.A severe travel warning is in place for Israeli tourists planning to visit the Sinai Peninsula and mainland Egypt. The Sinai’s beach resorts have long been popular travel destinations for Israeli sightseers.The last major terrorist attack against a popular tourist site in Sinai was in April, during Passover, when Islamic State-affiliated gunmen attacked Saint Catherine’s Monastery.The current travel warning for Sinai is Level 1, the highest warning level issued by the bureau. It is recommended that Israelis avoid all travel to the area due to the “very high concrete threat.” Israelis currently in the Sinai are recommended “to leave immediately.”The warning level for the Egyptian mainland is Level 3, for which Israelis have also been advised not to visit.Travel warnings remain in place for Turkey, Jordan, southern Philippines and “enemy” countries. Israeli law prohibits its citizens from traveling to Syria, Iraq, Iran, Lebanon, Yemen and Saudi Arabia.