Israel will not participate in RIMPAC 2020

Due to continued spread of the coronavirus, the world's largest maritime drill will take place only at sea. 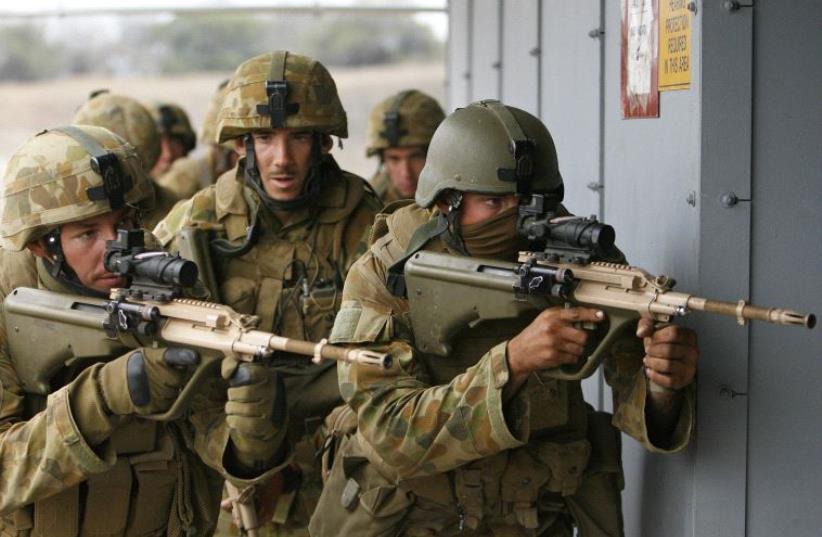 Soldiers of Alpha Company 1RAR of the Australian Army get ready to clear a building during training for the multi-national military exercise RIMPAC at Pohakuloa Training Area on the island of Hawaii July 22, 2012
(photo credit: REUTERS)
Advertisement
The Israeli Navy will not participate in RIMPAC 2020 as planned due to the continued spread of the deadly coronavirus, The Jerusalem Post has learnt.The biennial Rim of the Pacific (RIMPAC) multinational naval exercise led by the US 3rd fleet off of the coast of Hawaii and Southern California in August has been held every two years since the early 1970s and is considered the world’s largest maritime exercise.Israel took part in the exercise for the first time in 2018 along with 26 other nations, 47 surface ships, five submarines, 18 national land forces, and more than 200 aircraft and 25,000 personnel.  The Israeli military cancelled all joint military drills in March due to the outbreak of the pandemic and a IDF Spokesperson told The Post that despite the decrease of cases in Israel, the military will hold off until July to reassess the situation.Due to the coronavirus, the US Navy said the drills this year will be held only at sea with a minimal footprint on shore “to ensure the safety of all military forces participating,” read a statement released by the US Navy Pacific Fleet.The exercise will include multinational anti-submarine warfare, maritime intercept operations, and live-fire training events, among other cooperative training opportunities. There will also be no social events and Joint Base Pearl Harbor-Hickam will only be accessible for logistics support with a small number of staff for command and control, logistics and other support functions.Similar to 2018, the Israeli Navy was not set to send naval vessels to take part in the drill, rather troops were to take part in shore-based exercises. With those being cancelled, “Israel will not take part in RIMPAC 2020,” an IDF spokesperson said.The theme of RIMPAC 2018 being “Capable Adaptive Partners” and the drill will work to increase multinational cooperation and trust as well as enhance interoperability of troops and strategic maritime partnerships.“We remain committed to and capable of safeguarding allies and partners throughout the Indo-Pacific region,” said Commander, U.S. Pacific Fleet Adm. John Aquilino. “The flexible approach to RIMPAC 2020 strikes the right balance between combating future adversaries and the COVID-19 threat.”According to a report in Defense News, Hawaii Gov. David Ige had asked the military to postpone the drills “until the COVID-19 situation here in the islands subsides” and as such the drill has been reduced to two weeks from August 17-31 instead of the usual five weeks from late June to early August.