Israel, WJRO to work to retrieve assets from Holocaust era

Joel Lion, the Foreign Ministry’s special envoy for Holocaust issues and the return of Jewish assets, said that for 25 years the government and the WJRO had been trying to work together. 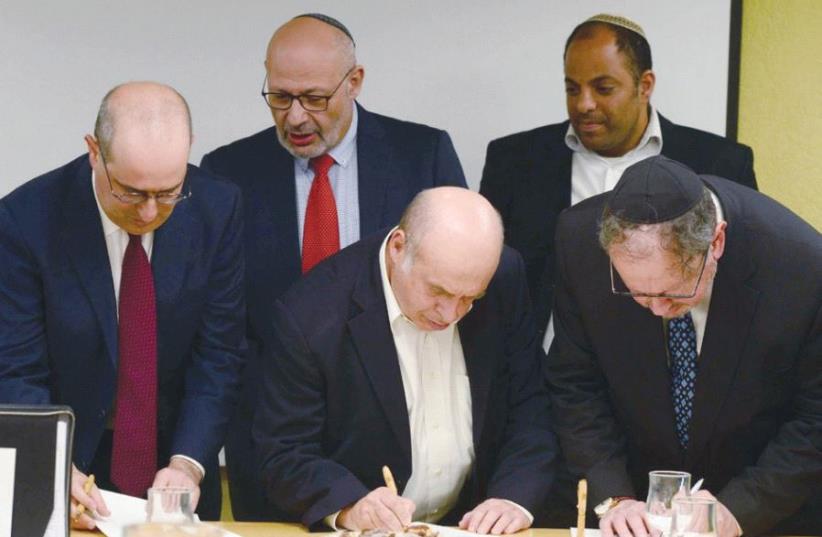 WORLD JEWISH Restitution Organization co-chairs Avraham Biderman (front right to left) and Natan Sharansky sign a declaration of intent for the restitution of Holocaust-era assets at the President’s Residence
(photo credit: MARK NEYMAN/GPO)
Advertisement
Representatives of the government of Israel and the World Jewish Restitution Organization on Thursday signed a declaration of intent as part of a working plan to unite initiatives for the retrieval of Jewish assets seized during the Holocaust era.Joel Lion, the Foreign Ministry’s special envoy for Holocaust issues and the return of Jewish assets, said that for 25 years the government and the WJRO had been trying to work together.With time running out in terms of the ongoing presence of Holocaust survivors, he said he was hopeful that united efforts would prove successful.The declaration was signed at the President’s Residence by Foreign Ministry director-general Yuval Rotem (the ministry’s first director-general to appoint an envoy to deal with Holocaust issues), Avi Cohen, director- general of the Social Equality Ministry, WJRO co-chairs Avraham Biderman and Natan Sharansky, and Gideon Taylor, WJRO chair of operations and treasurer.The two ministries will work in tandem in representing the government.Among others present at a preliminary meeting before the signing were President Reuven Rivlin, Social Equality Minister Gila Gamliel, German Ambassador Dr. Clemens von Goetze and head of the delegation of the EU Ambassador Lars Faaborg Andersen.All speakers lamented the injustices to which poverty- stricken, elderly Holocaust survivors in Israel are subjected.Gamliel quoted from Psalms: “Cast me not off in the time of old age,” saying that the message conveyed in the verse “is our moral compass as we deal with elderly Holocaust survivors.”Providing for the well-being of survivors, she said, is a duty, holy work and a moral obligation.Gamliel said restitution of Jewish property is an ongoing aim, but hoped to achieve additional rights for Holocaust survivors through the passing of new legislation, especially in Germany.She said she was determined to improve the lives of Holocaust survivors in their golden years. “We must be there for them and act on their behalf,” she said, adding, “Many elderly survivors need our help to live in dignity.”No Holocaust survivor should have to live below the poverty line or look for food in a soup kitchen, she added, insisting that this is a “top priority” issue.No amount of compensation can make up for what happened to these innocent people, but it does give them a semblance of justice, she said.With the resurgence of antisemitism, she continued, “it is critical to remember the past.”Enough had been said on the subject over the years; the time has come to act, she said.Biderman, the son of Polish- born Holocaust survivors, was born in a German DP camp. His parents, who are no longer living, sought some measure of justice or restitution after the war, “but it didn’t happen in their lifetime,” he said.Taylor spoke of several million shekels, gleaned from property that belonged to a now non-existent Jewish community in Romania, that will next week be distributed to the poorest, weakest and sickest of Romanian Holocaust survivors in Israel.Though memories cannot be erased, and places where Jewish life thrived cannot be resurrected, Taylor said, it is important to preserve history. “To ignore history is to deny it,” he said.Rotem said that the restitution endeavor goes beyond territory and restoration of property – it is a matter of dignity and justice. “International institutions have not addressed the matter properly,” he said.Achieving some sort of justice, he explained, is not just for the victims, but the nations concerned.Rotem emphasized that the work cannot be done by any one organization. “It requires the joining of hands in order to succeed,” he said.He commended Serbia for establishing a fund of heirless Jewish property to help Holocaust survivors, but noted that this is an exception to the rule.There are currently around 190,000 Holocaust survivors in Israel – more than in any other country, said Sharansky, “but 40 are dying every day; we are running against time.”The State of Israel is doing a lot, he said, but has to do more “without waiting.”As someone who had fought to bring an end to Communist rule, Sharansky said that he found it strange that some countries that joined Europe as free nations after achieving independence, deny responsibility for what happened to their Jewish populations and say that they suffered too.Antonio Tajani, president of the European Parliament, can’t imagine Europe without Jews, Sharansky said, “but Jews feel more and more uncomfortable in Europe.” As for countries that are shilly-shallying over the restoration of assets, Sharansky said, “you have to accept the minimal norms of decency.”