Israel-based humanitarian aid organization IsraAID says it will send a team to assist victims of extreme flooding in the United States. 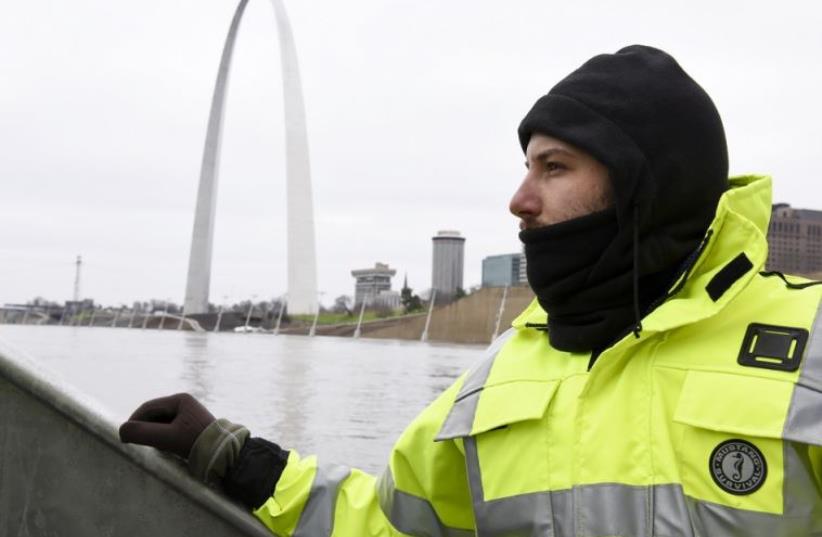 US Geological Survey (USGS) hydro technician Jason Carron assesses the Mississippi River flood waters in St. Louis
(photo credit: REUTERS)
Advertisement
Israel-based humanitarian aid organization IsraAID says it will send a team to assist victims of extreme flooding in the United States.Missouri and Illinois were bracing for more flooding on Thursday as rain-swollen rivers, some at record heights, overflowed their banks, washing out hundreds of structures and leaving thousands of people displaced from their homes.In response, IsraAID, which provided emergency relief in the United States after 2006’s Hurricane Katrina, said that it “is coordinating with national partners and officials” and has a team of seven to 10 disaster specialists “on standby ready to deploy to the affected region.”Since Katrina, “tornadoes, winter storms, wildfires, and flooding have taken IsraAID teams to 10 states across the United States, reaching thousands and helping them with debris removal, all implemented in cooperation with national organizations and local governments.“As swollen rivers and streams push to heights not seen in nearly a quarter-century, officials in Missouri and Illinois are scrambling to help the tens of thousands who are left homeless. With record breaking storms in Texas and Mississippi as well, first responders, volunteers, and local communities are going through a difficult holiday season, with the death toll and number of displaced growing,” the group said.Record flooding from rain-swollen rivers has washed out hundreds of structures in Missouri, Illinois, Arkansas and eastern Oklahoma, forcing thousands to flee their homes, and 9.3 million Americans still face flood warnings.At least 28 people have died in the US Midwest's extreme weather since the weekend, mostly from driving into flooded areas after storms dropped up to 12 inches (30 cm) of rain, officials said.The days of downpours have pushed the mighty Mississippi and its tributaries to record highs or levels not seen in decades, the National Weather Service and local officials said.Southern states like Louisiana will be the next to lose homes and businesses to flooding as overflowing rivers push downstream toward the Gulf of Mexico, the National Weather Service said.The floodwaters have closed sections of Interstate 44 and Interstate 55, both major trucking routes, along with many smaller roads near rivers, Illinois and Missouri officials said on Thursday.Freezing temperatures in the area in the coming days will cause some flooded areas to turn icy, adding to challenges, forecasters said.Significant river flooding is expected for the lower Mississippi River, the second-longest river in the United States, into mid-January, the NWS said.As of Thursday morning, some 9.3 million people nationwide were in areas with flood warnings. That was down from 12.1 million on Wednesday and 17.7 million on Tuesday.Workers in Tennessee were preparing on Thursday for the Mississippi River in Memphis to reach flood stage over the weekend."We're moving things up high and we've got our generators out and got some extra water," said Dotty Kirkendoll, a clerk at Riverside Park Marina on McKellar Lake, which feeds off the Mississippi River.The US Coast Guard issued a high water safety advisory on Thursday for more than 560 miles of the Lower Mississippi River from Caruthersville, Missouri, to near Natchez, Mississippi. It is expected to stay in effect for several weeks, based on NWS forecasts, the Coast Guard said.Louisiana Governor Bobby Jindal has declared a state of emergency to prepare for flooding, and levee systems are being monitored daily."All that water's coming south and we have to be ready for it," Lieutenant Governor-Elect Billy Nungesser told CNN. "It's a serious concern. It's early in the season. We usually don't see this until much later."Water rose to the rooftops of some structures in Missouri towns and two rivers west of St. Louis crested at historic levels, flooding towns, disabling sewer plants and forcing hundreds of residents from their homes.Eureka, Missouri, Mayor Kevin Coffey said his town had not seen such bad flooding in 150 years and some of its oldest businesses have been damaged. The Mississippi is expected to crest in the small town of Thebes, Illinois, at 47.5 feet on Sunday, more than a foot and a half (46 cm) above the 1995 record, the National Weather Service said.Thebes village worker Bobby White said some sewage pumps were shut down to avoid overloading and portable toilets had been supplied to affected areas. Most homes in the town, including his own, are on a hill and should be fine, he said."Most of the people at the bottom of the hill moved out years ago," White said. "If comes on the hill, all of Alexander County will be wiped out."Illinois officials have provided 800,000 sandbags to communities endangered by the Illinois, Sangamon, Iroquois and Mississippi rivers, said Patti Thompson, spokeswoman for the Illinois Emergency Management Agency.Some evacuees stayed with family or friends or went to hotels, while others found refuge in Red Cross shelters set up in the area.Rick Miller, US property practice leader for Aon Risk Solutions, said it was too early to comment on possible damage costs. He said the majority of the impact will be to the National Flood Insurance Program.Miller does not expect the flooding, as bad as it has been, to be a "significant insurance industry event" and said the insurance impact of Hurricane Sandy in 2012 was far greater.