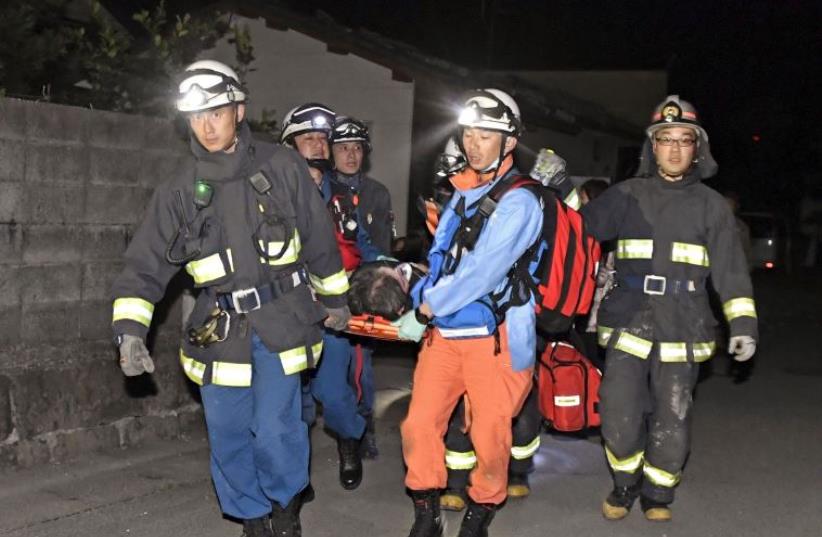 Rescue workers use a stretcher to carry a man who was rescued from a collapsed house after an earthquake in southern Japan April 15, 2016
(photo credit: REUTERS)
Advertisement
Dozens of Israeli aid workers are working to provide support on the ground in Japan and Ecuador after multiple deadly earthquakes recently rattled the two countries.The Israeli humanitarian aid agency IsraAID announced on Sunday evening that it already has a delegation in southern Japan, where over 40 people were killed and thousands were injured in a pair of large scale tremors that have struck the Kumamoto province since Thursday.Israeli relief workers have been distributing goods and opening child care centers in the affected Japanese communities, IsraAID said in a statement.Meanwhile, an IsraAID team was expected to leave Sunday night to assist with emergency efforts in Ecuador after a 7.8 magnitude earthquake ravaged the Andean country, killing at least 272 people. The Israeli team in Ecuador was prepared to offer medical treatment, psycho-social outreach and child resources."In addition to the dozens of volunteers of IsraAID who are working hard to provide support to the teams on the ground IsraAID plans to provide on going support to both countries and regions in need," the organization said. Both countries are located on the seismically active "Ring of Fire" that circles the Pacific, but according to the US Geological Survey large quakes separated by such distances would probably not be related. Reuters contributed to this report.