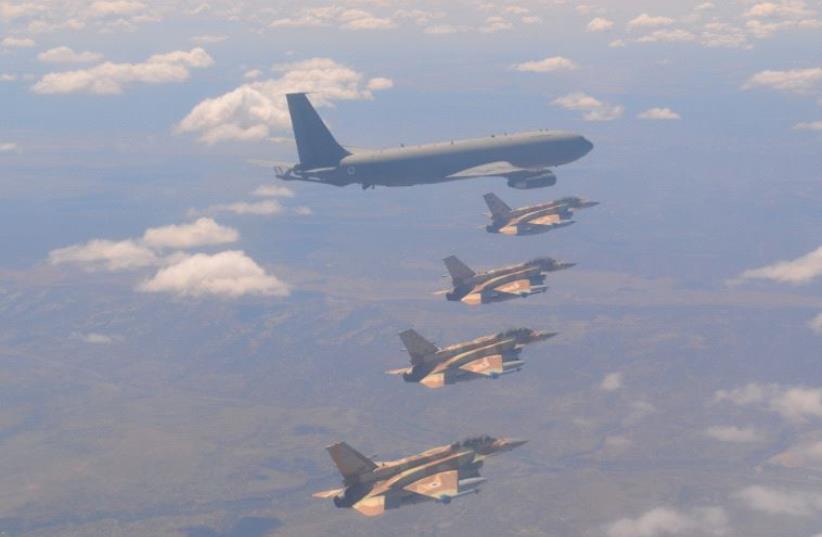 Red Flag drill hosted by the US Air Force held at Nellis Air Base, Nevada
(photo credit: IDF SPOKESPERSON'S UNIT)
Advertisement
Israel Air Force jets, transport planes, and tankers landed back in Israel on Wednesday night, after taking part in the 11-day Red Flag exercise hosted by the US Air Force at Nellis Air Base, Nevada, from August 15 to 26.The IAF took part in the drill together with the Pakistani and UAE air forces, according to American media reports.Just getting to the far-away drill formed a significant training run for long-range flights, a senior IAF source said on Thursday, in reference to the air force’s need to maintain strike capabilities for potential future flights to Iran.“We want to train forces for long-range flights. This is a very complex mission. I have not seen another country that alone gets there [to Red Flag] without external [American] services. This strengthened our air crews’ longrange ‘muscles,’” the source said.During the exercise itself, dozens of planes took off for missions lasting a few hours, in which they encountered a US squadron simulating an enemy in the air, as well as mock surface-to-air missile batteries, and even cyber attacks on plane computer systems.The Americans update each exercise with “scenarios that they wish to use to train themselves and international forces,” the source said.Night and day missions were simulated, and Israel’s participation helped significantly to fortify bilateral air force cooperation, according to the source.None of the Israeli air crew members who took part in this year’s drill was in last year’s Red Flag, which also saw Israeli participation.“There is no replacement for this kind of exercise. We can’t set up this kind of training arena in Israel. It is hard to surprise our air crews here during training,” the source stated.In 2017, Israel will hold its own international air exercise, called Blue Flag. The US Air Force has already confirmed its participation, and several additional friendly states are expected to take part.The Israeli aircraft taking part in the Nevada drill evidently drew the attention of some Americans, specifically residents of Bangor, Maine. The Bangor Daily News reported on Tuesday that IAF F-16s stopped in Bangor to refuel on their way back home from Nevada, causing an unaccustomed barrage of noise in the sky.