As of 5 p.m. local time, twenty-two fire trucks and at least 10 aircraft were working to contain the blaze. 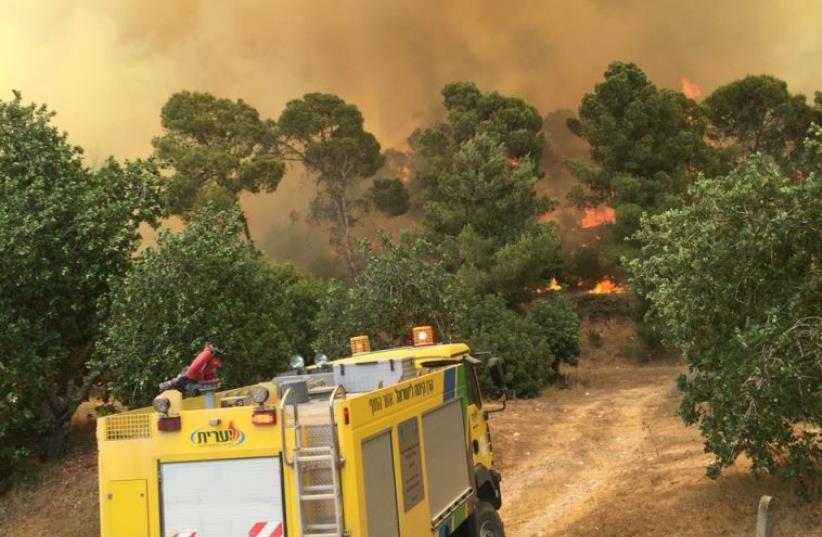 Brushfire rages near Beit Shemesh
(photo credit: BEIT SHEMESH FIREFIGHTERS SPOKESPERSON'S OFFICE)
Advertisement
A wildfire that broke out on Friday scorched more than 200 hectares (494 acres) near Beit Shemesh, before it was extinguished by a massive deployment of firefighters and volunteers from across the country after more than nine hours.The fire was described by Shmulik Friedman, the commander of operations of the Fire and Rescue Service, as the biggest since the December 2010 Carmel fire, in terms of the number of firefighters who took part. That blaze scorched an area of more than 5,000 hectares and killed 44 people, most of them Israel Prisons Service cadets who were sent to evacuate a security prison in the North and were trapped.More than 70 fire crews took part in the effort on Friday, including more than 150 firefighters, IDF personnel, rangers from the Israel Nature and Parks Authority and Jewish National Fund, and volunteers, according to the Beit Shemesh area fire department.The fire service also deployed 12 planes and helicopters to help extinguish the blaze.The fire, which burned large areas of forest and brush near the moshavim of Kfar Uriya, Tarum, Taoz and elsewhere near Beit Shemesh, was aggravated by the hot weather, strong winds, and dry conditions.Police closed a section of Route 44 and evacuated hikers from the area, but houses in the moshavim near the blaze were not evacuated.It could take two decades or more to return the forests to their condition before the blaze, authorities said Saturday.Although the exact cause of the fire has not been determined, a JNF official interviewed by Channel 2 on Saturday said they suspect it may have been caused by a resident of an area moshav who carried out a controlled brush burn that spun out of control.Arson is not suspected for the time being. Also on Friday, a fire sparked on a date farm near Yafit in the Jordan Valley was fanned by strong winds and quickly raged out of control.It was extinguished only hours later after more than 15 fire teams were called to the area. In northern Israel on Saturday, brush fires broke out near the village of Sajur, near Harashim outside Karmiel, and outside Shimshit near Ma’alot in the lower Galilee. A total of eight helicopters and planes took part in extinguishing the fire near Sajur.