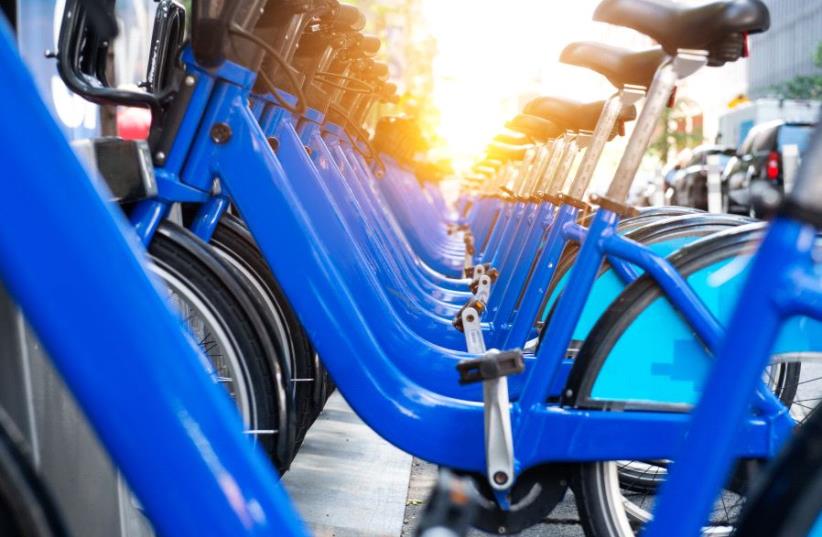 Bicycle rental service spot on city street. Public transportation concept.
(photo credit: INGIMAGE PHOTOS)
Advertisement
Dan Hanegby, an Israeli investment banker, was killed in a collision with a charter bus on Monday morning in Manhattan, according to the New York Times.The 36-year old Israeli father of two was riding a bicycle from NYC's bike-share program, Citi Bike, during the tragic accident, marking the first fatal incident involving these bikes.Local police reported that accident occurred in Manhattan's Chelsea neighborhood when a bus hit Hanegby from behind, causing him to fall off his bicycle, landing under the vehicle's rear tires. Originally from Tel Aviv, Hangeby moved to the US after his IDF military service to attend Brown University in 2003. He studied for his Bachelor's in Economics and then served as the vice president for investment banking at Morgan Stanley, according to his LinkedIn page. At the time of his death, he worked as the director of investment banking for Credit Suisse. Besides his biking hobby, Hanegby was a tennis champion, ranking number 1 in Israel by the age of 16. Citi Bike expressed its sympathies to Hanegby and his family on Twitter, saying that the company wished "to express our heartfelt condolences."

Together with the City of New York, we wish to express our heartfelt condolences to the rider's family & loved ones on this terrible tragedy

Hangeby is survived by his wife and two daughters.