Joseph Dunford is on his third official visit to Israel in two years. 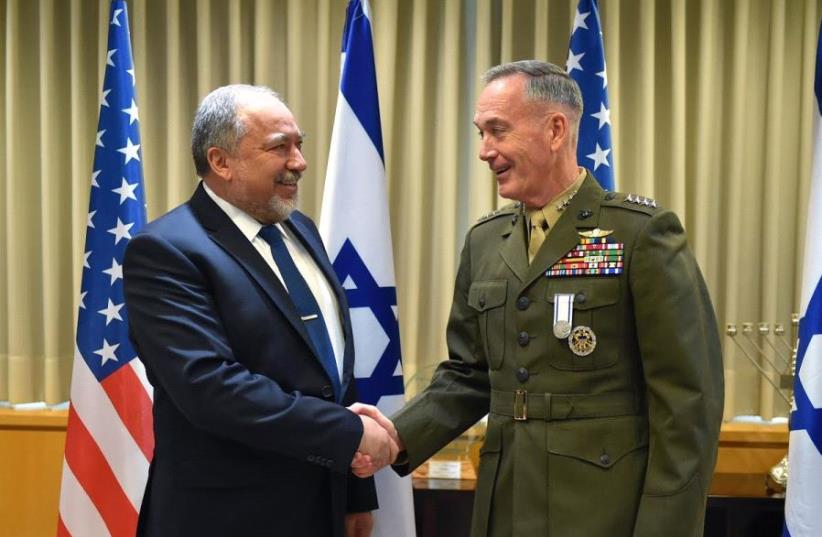 Defense Minister Avigdor Liberman meets with US Army General Joseph Dunford, Chairman of the Joint Chiefs of Staff, in Jerusalem, May 9, 2017
(photo credit: ARIEL HERMONI / DEFENSE MINISTRY)
Advertisement
Gen. Joseph Dunford, chairman of the US Joint Chiefs of Staff, was presented with a Medal of Appreciation by IDF Chief of Staff Lt.-Gen. Gadi Eisenkot at the Kirya military headquarters in Tel Aviv on Tuesday.
Avigdor Liberman meets Joseph Dunford in Jerusalem, May 9, 2017 (Defense Ministry)
Dunford arrived on Tuesday for a two-day visit as a guest of Eisenkot, who awarded him the medal for his outstanding service, special contribution to the IDF and for the personal leadership he has demonstrated by strengthening ties between the militaries of the two allies.During his command of the 5th Marine Regiment in the 2003 invasion of Iraq, Dunford earned the nickname “Fighting Joe” while serving under now secretary of defense James Mattis. Mattis was in Israel on his first visit in his current post last month.Last August, Eisenkot met with Dunford in Washington, and received the United States Armed Forces’ Legion of Merit military decoration, for “exceptionally meritorious service.”Dunford on Tuesday also met with Defense Minister Avigdor Liberman who thanked the general for his “great friendship with Israel” and said that his visit to the Jewish state is “further proof of the depth of the security relationship between Israel and our great friend the United States.”After his meeting with Liberman, Dunford met with Prime Minister Benjamin Netanyahu in his office in Jerusalem, and then toured the Yad Vashem Holocaust Museum where he laid a wreath at the Hall of Remembrance in memory of the victims of the Shoah.“We have a great alliance between Israel and the United States and a great alliance between our militaries. We appreciate it and we know that this alliance is good now not only for security but for peace,” the prime minister told Dunford, adding that he looks forward to welcoming US President Donald Trump on his upcoming visit to Israel.During his meeting with Netanyahu, Dunford also met with Jewish World War II veterans of the allied armies who wore military medals and shared their stories with him.The top American military commander is in Israel to discuss the cooperation between the two allied militaries as well mutual security challenges including the civil war in Syria, Bashar Assad’s chemical weapons arsenal, Iran’s continued attempts to transfer advanced weaponry to Hezbollah as well as developments in Sinai.Israel was the first country that Dunford visited when he took over from Gen. Martin Dempsey in October 2015.Dunford’s third official visit to the country in two years comes as the Israel Air Force and US Air Force conduct joint drills out of Uvda Air Base near Eilat and two weeks before Donald Trump is due to make his first overseas visit as president where he is expected to travel to Saudi Arabia, Israel and the Vatican.Before arriving in Israel, Dunford met with Turkish Chief of General Staff Gen.Hulusi Akar; they discussed the security situation in the Middle East including developments in Iraq and Syria and the fight against Islamic State. On Monday, Turkish President Recep Tayyip Erdogan warned the United States against moving its embassy from Tel Aviv to Jerusalem.“Israel keeps getting away from punishment which leads it to escalated aggression against Palestinians,” Erdogan said, adding that all attempts to reach a peace deal will fail “unless Israel is held accountable for its crimes.”In March, Gen. Curtis Scaparrotti, head of the US Army’s European Command and supreme allied commander Europe, visited Israel for his second time, underscoring the strong and enduring military partnership between Israel and the United States and the US commitment to maintaining Israel’s qualitative military edge in the region.