The glass bridge in China that was designed by an Israeli architect temporarily closed due to the need for improvement and updating the structure caused by overcrowding. 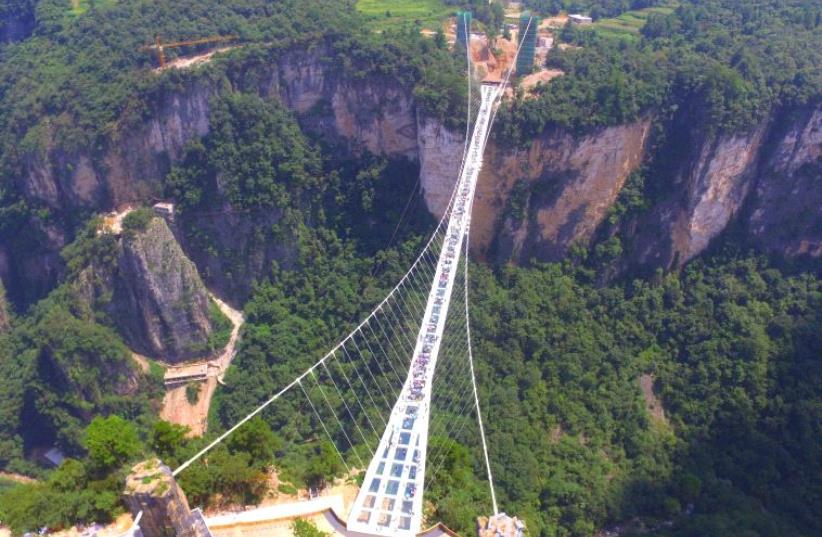 People visit a glass bridge at a gorge as it opens to the public in Zhangjiajie, Hunan Province, China
(photo credit: REUTERS)
Advertisement
Nearly shy of two weeks after China opened the world's longest and highest glass-bottom bridge designed by Israeli architect Haim Dotan, the suspended structure closed on Friday.The 430-meter-long skywalk suspended across Zhangjiajie Grand Canyon in Hunan Province's scenic Zhangjiajie National Park temporarily closed after opening to the public on August 20. "We're overwhelmed by the volume of visitors," CNN quoted a spokesperson from the Zhangjiajie Grand Canyon operations as saying. The spokesperson acknowledged that there had been no accidents or cracks in the infrastructure.
Israeli-designed glass bridge in China (Reuters)
While a reopen date has not yet been announced, CNN reported that the attraction's management said Thursday on its website that the closure had been taken due to the "urgency to improve and update" the structure. For safety purposes, a maximum of 8,000 visitors are reportedly permitted to cross the skywalk per day. According to CNN, the bridge's Tel Aviv-based designer, Dotan, had not provided an immediate response to a request for comment. The glass-floored bridge hanging some 300 meters (984 feet) above ground with a width of six meters wide is situated between two cliffs in the picturesque Zhangjiajie mountains that  inspired the American epic science-fiction film 'Avatar.'The hanging passageway is paved with 99 panes of triple-layered transparent glass.