Israeli girls gear up for U19’s

The event was held as part of the ‘Football for All’ campaign which strives to promote women’s sport and joint living. 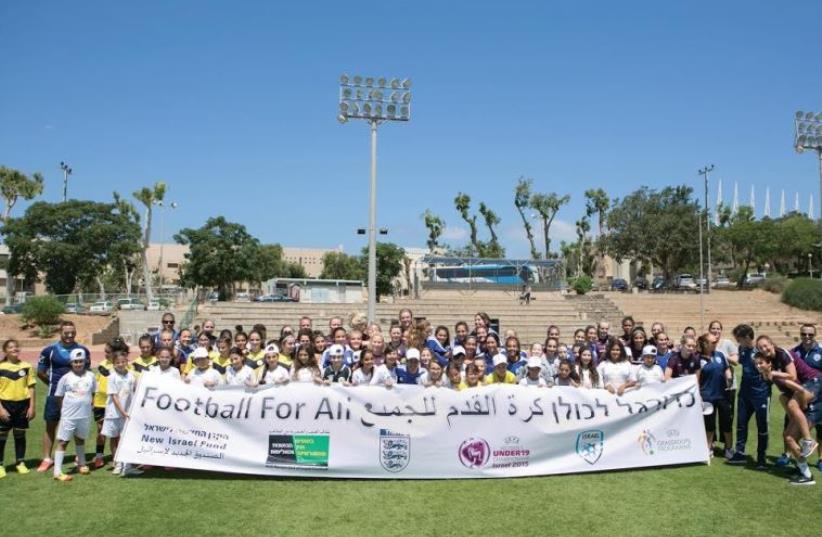 Participants in ‘Football for all’ event
(photo credit: ANAR GREEN)
Advertisement
Exactly one week before the start of the UEFA European Women’s Under-19 Championship Finals in Israel, the blue-and-white and England women’s under-19 teams held a joint training session yesterday with Jewish and Arab girls’ teams from Yefia, Hadera and Netanya at the Wingate Institute. The event was held as part of the ‘Football for All’ campaign which strives to promote women’s sport and joint living. The session was held as an initiative of New Israel Fund’s KIO Israel to combat racism and violence in football in partnership with the Israel FA and English FA. The three girls’ teams chosen to represent joint and equal society in the Arab and Jewish sectors were Maccabi Yefiya, Maccabi Kishronot Hadera and Netanya Girls. The first two teams compete together in Israel’s Northern Girl’s League and the third team is part of Netanya Municipality’s excellence project. The tournament will begin on July 15 and end 12 days later. Seven teams from a record-equaling field of 48 joined hosts Israel, with Group A to include the blue-andwhite, Sweden, France and Denmark. England, Germany, Spain and Norway will play in Group B. The matches will take place in Lod, Ramle, Rishon Lezion and Netanya.