After donning the vest in front of the camera, Lachover was stabbed, and the knife penetrated the vest, injuring him lightly. 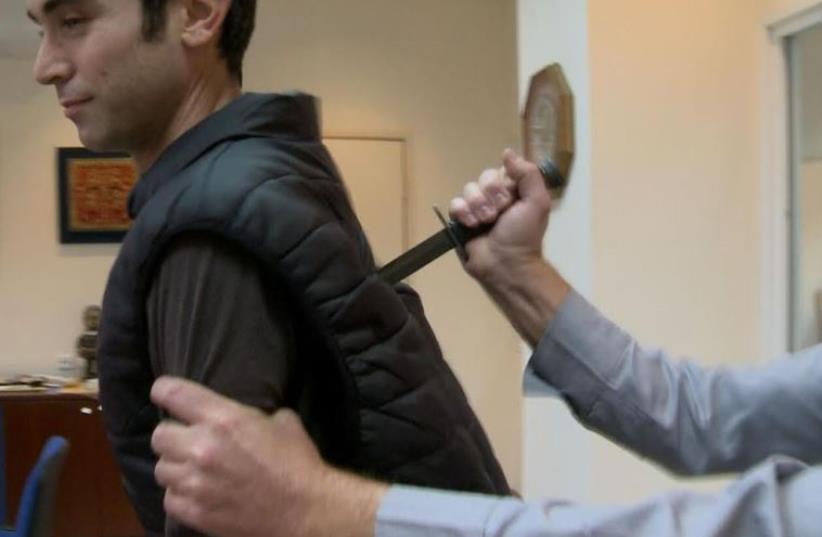 Channel 1 reporter is stabbed and lightly injured while reporting on knife-proof vests Eitam Lachover
(photo credit: IBA)
Advertisement
To the uninitiated, being a reporter, witnessing news as it happens and getting up close to news makers seems to be an exciting way to make a living. But for journalists who are field reporters, the profession also carries a lot of risks as Eitam Lachover, the education reporter for the Israel broadcasting Authority’s Channel 1 discovered when he went to cover a story outside his regular beat.Lachover went out on Wednesday morning to do a news story on bullet-proof and knife-proof safety vests used by both civilians and the defense establishmentIn the course of interviewing people for the segment, he met with representatives of the company that manufactures the vests and was persuaded to be a guinea pig and agree to be stabbed while wearing the safety vest. In that way, his report could become a first person story, he reasoned. It did indeed become a first person story, but not in the way he anticipated.After donning the vest in front of the camera, Lachover was stabbed, and the knife penetrated the vest, injuring him lightly.Highly embarrassed, the company representatives rendered immediate medical treatment before transferring Lachover for medical treatment at a hospital, where a surgeon stitched up the wound.