Israeli-made Spike missile to be used on Philippine helicopters

The Spike is slated to be employed by the Philippine Navy as an anti-ship weapon by next year. 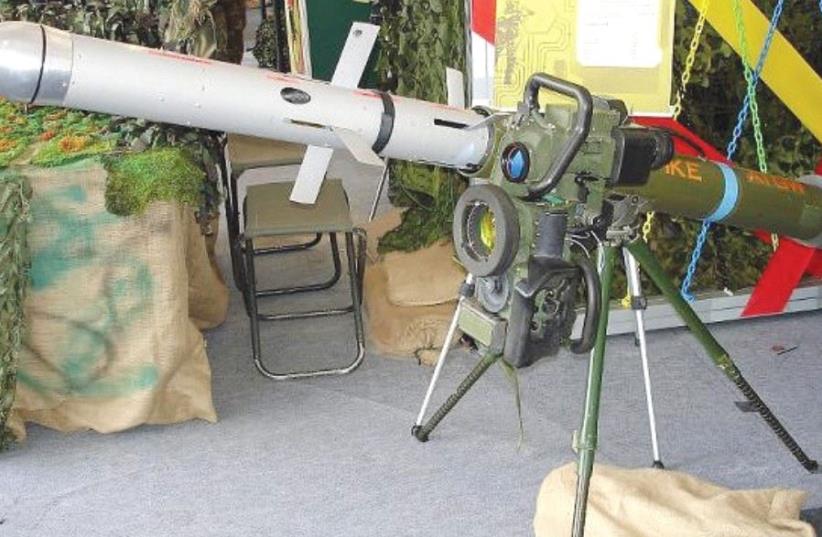 A SPIKE MISSILE is seen mounted on a tripod launcher at a Singapore Army Open House in 2007.
(photo credit: Wikimedia Commons)
Advertisement
As Israel continues its pivot toward Asia, Israeli-made Spike missiles are to be used by the Philippine Navy’s first two anti-submarine helicopters.Rafael Advanced Defense Systems Ltd. produces the Spike, which was originally designed to destroy tanks.It will be employed by the Philippine Navy as an anti-ship weapon on the Agusta Westland AW-159 Wildcats that are due to be delivered to Manila by next year.According to Rafael, the Spike NLOS (non-line-of-sight) missile “is a perfect solution for naval helicopters,” with a range of 30 kilometers and a “dedicated warhead which can neutralize any target.”The missile, capable of penetrating 39 inches of armor, can be operated in either direct attack mode or by mid-course navigation based on target coordinates only. These modes enable defeat of long-range hidden targets with pinpoint precision.Philippine Navy spokesman Capt. Lued Lincuna was quoted by the Philippine News Agency on Tuesday as saying that “the missile has a built-in camera that allows it to be operated day or night” and allows pilots to engage hostile targets beyond their visual range.Rafael will also be providing the shorter-range Spike ER missiles, weighing 33 kg with a range of 8 km, which will be used on the navy’s multi-purpose attack craft (MPAC ).The Philippine Navy is currently operating six MPAC s, but none is armed with the missile system.
Protector Unmanned Surface Vehicle fires Spike Interceptor Missile during recent test (credit: Rafael Systems)
Two new MPAC s, which are being built in a joint venture between Filipino Propmech Corporation and Taiwan’s Lung Teh Shipbuilding Co. and set for delivery by the end of 2017, will have mountings for Spike missiles.Israel and the Philippines maintain close security ties, with Israel selling a large amount of weaponry to the Philippine Army over the years. With growing tension with China in the South China Sea, the overall flow of arms to the region has spiked.A February report by the Stockholm International Peace Research Institute stated that, “With no regional arms control instruments in place, states in Asia continue to expand their arsenals. While China is increasingly able to substitute arms imports with indigenous products, India remains dependent on weapons technology from many willing suppliers, including Russia, the US, European states, Israel and South Korea.”Philippine President Rodrigo Duterte has expressed interest in visiting Israel and it is expected that he would use a visit to tighten security ties between the two countries and purchase more arms, as the country continues to fight against Abu Sayyaf and Islamic State terrorists.