He wrote in one post, “It is inconceivable that there is something called an Arab political party [in the Knesset]. Shortly, there will also be a Hamas party in the Knesset... 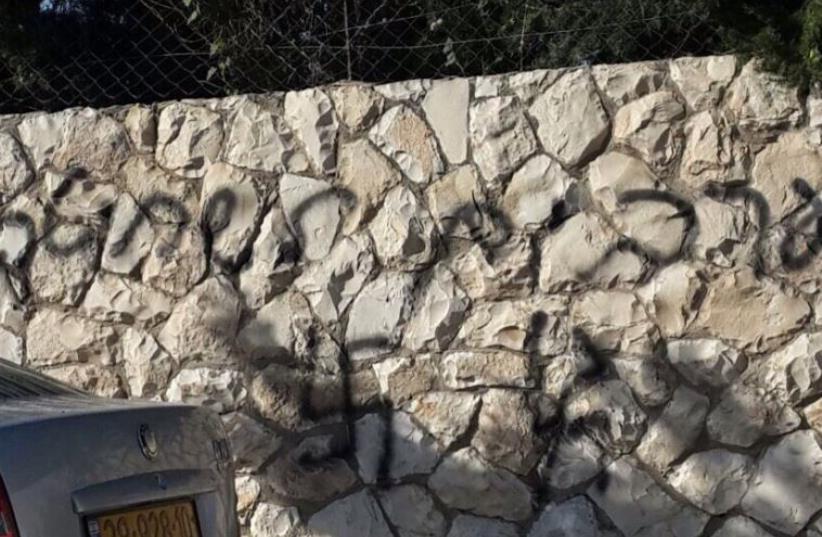 ARAB HATE-SPEECH found in Jerusalem’s Palestinian neighborhood early Tuesday morning.
(photo credit: JERUSALEM POLICE)
Advertisement
The Central District Attorney’s Office filed an indictment on Monday with the Petah Tikva Magistrate’s Court against Zohar Zuaretz for incitement to violence against Arabs and membership in a terrorist group.Much of the indictment, which was approved by Attorney-General Avichai Mandelblit, stems from Zuaretz’s posts on social media that called for violence against Arabs and against Israeli law enforcement, left-wing Israelis and Yesh Atid Party leader Yair Lapid.Zuaretz, 33 of Petah Tikva, is also accused of being a member of the outlawed Jewish group Kach.According to the indictment, from 2012-2017, Zuaretz used a Facebook account with more than 1,000 followers to publish not only hateful messages about Arabs, but specific calls to perpetrate violence against them.With the exception of some short breaks, he continued with such posts, which garnered significant support, even after he was interrogated by law enforcement and warned to stop.He wrote in one post: “It is inconceivable that there is something called an Arab political party [in the Knesset]. Shortly, there will also be a Hamas party in the Knesset... all of the Arabs and the leftists should be burned! [Meir] Kahane was right! How is it that we did not think to create a ‘price tag’ party?” In another post, according to the indictment, he wrote, “In honor of the new month, we should merit destroying all of our enemies including Arabs, leftists – such as Yair Lapid and his party – and we should hang them like [the biblical] Haman and his sons were hung – Kahane was right – price tag in blood!” Zuaretz also posted having had a dream in which he entered the children’s section of a hospital and “for every Arab baby, I beheaded him... it was the best dream I have had until today.”After the conviction of Hebron shooter Elor Azaria, he posted, “A true Jew will not join this evil and heretical army. Go and do things alone. The time has come to start a rebellion...I expect all the soldiers... to aim their weapons in the right direction.”During the evacuation of the Amona unauthorized settler outpost in the West Bank, the indictment alleged that he wrote, “I pray to god that one of the residents will have the courage to load a weapon and spray the evil policemen/soldiers. Each time a person from the disgraceful forces is killed, I will make a celebration.”He also said that he hoped every Jew should be like Baruch Goldstein, who massacred 29 Palestinians in Hebron at the Cave of the Patriarchs in 1994.
On several occasions, Zuaretz also sprayed anti-Arab messages like “Death to Arabs” or “No entry to Arabs” on law enforcement vehicles and public buses serving both Israelis and Palestinians.