Soldiers performing in the ceremony on Mt. Herzl spelled out the Hebrew term Am ehad, medina ahat ('one nation, one state'), causing some to raise eyebrows. 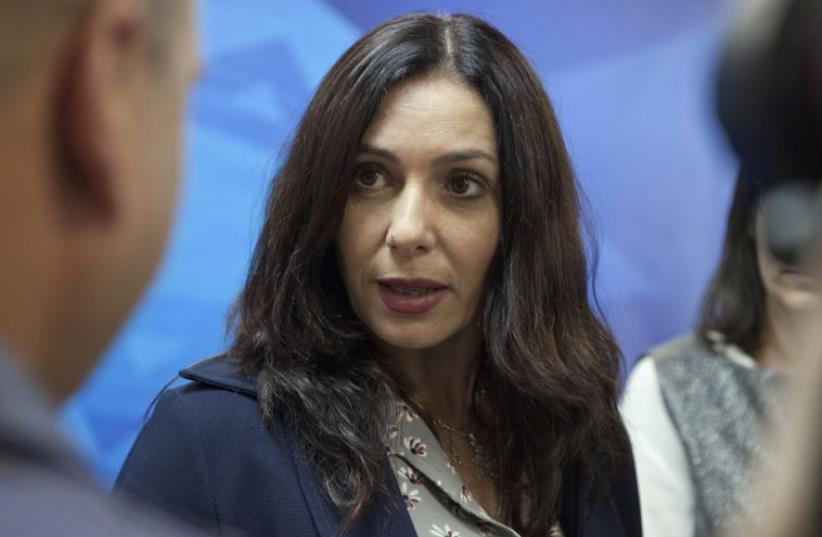 Culture Minister Miri Regev
(photo credit: REUTERS)
Advertisement
Culture Minister Miri Regev reacted on Friday to the controversy generated by a slogan which was spelled out during official celebrations for Independence Day on Mt. Herzl in Jerusalem on Wednesday.Discussion of the issue was ignited when soldiers performing in the ceremony, which was broadcast on live television nationwide, spelled out the Hebrew term Am ehad, medina ahat ("one nation, one state").

Observers of Jewish history and the Holocaust noted with irony on social media that the statement hearkened back to a Nazi-era slogan ein Volk, ein Reich, ein Fuhrer ("one nation, one reich, one Fuhrer").The parallel prompted Regev to respond on Friday, rejecting any similarity between Israel and the Nazi movement.“Israel is a Jewish and democratic state celebrating its independence as it does each time this year,” the minister said. “The phrase ‘One nation, one state’ is an expression of the just aspirations of the Zionist movement from its inception – to establish a Jewish state.”“This was agreed upon by the Revisionists [led by] Ze’ev Jabotinsky, the Labor movement [led by Berl Katznelson and David Ben-Gurion], the forefathers of religious Zionism, and the rest of the Zionist leadership and intelligentsia.”“The phrase ‘Jewish state’ is enshrined in Israel’s Declaration of Independence and its basic laws, and it complements its democratic side, grating equal rights and respect for minorities in the State of Israel,” Regev said. The Israeli body politic was abuzz this past week after the army’s deputy chief of staff gave a Holocaust Remembrance Day speech in which he suggested that society was witnessing some of the same trends that gave rise to the Nazi regime in Germany over 70 years ago.The comments by Maj.-Gen. Yair Golan sparked outrage on the Right, while lawmakers on the Left defended the officer. Regev, for her part, demanded that Golan resign.