Sugars are more simplistic molecules than proteins, which may make Amai’s discovery and its future application revolutionary. 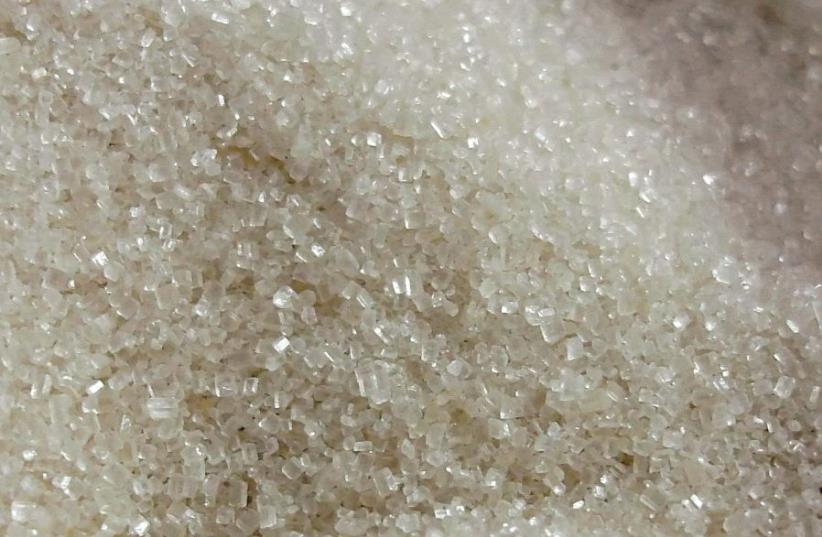 A close-up view of raw sugar
(photo credit: Wikimedia Commons)
Advertisement
An Israeli start-up company, Amai Proteins, is working to create a new type of artificial sweetener that it says will not have a bitter aftertaste, as many currently do.Amai Proteins is developing artificial sweeteners that differ from traditional versions since these are derived from proteins. The proteins – which are found in fruits – contain zero calories. They may offer a popular alternative for people with diabetes, who are unable to digest too much sugar, without triggering an insulin response.CEO Ilan Samish told JTA that “unlike other high-intensity sweeteners, Amai’s products are proteins and get digested in the upper gastrointestinal tract without causing any insulin response.”Previous artificial sweeteners differ greatly from the ones that the new start-up is proposing. Saccharin, also known as Sweet-N-Low in the US, is around 300 to 400 times sweeter than traditional sugar, and has been used since its discovery in 1879. Sodium cyclamate, which is popular in Europe, is around 30 to 40 times sweeter than traditional sugar. It was discovered in 1937, but later banned in the US, after trials led scientists to believe that it caused cancer in rats, according to an article in Science News.Still, both leave a bitter aftertaste. Scientists discovered that a mix of the two was not as bitter as either sweetener. This is due to taste receptors and how they are processed by the brain. In 2000, researchers revealed that there are receptors designed to detect bitter flavors, according to Dr. Maik Behrens, a molecular biologist at the German Institute of Human Nutrition Potsdam-Rehbrucke in Nuthetal, Germany, told Science Daily.A study in the journal Cell Chemical Biology uncovered that saccharin is able to inhibit the activity of bitter taste receptors, which are stimulated by cyclamate. Similarly, cyclamate is able to lessen the bitter aftertaste of saccharin. This insight is one which may pave the way to new enhancements in the chemical engineering industry of new artificial sweeteners.“Knowing that mixtures of saccharin and cyclamate exert reduced bitterness compared to the single compounds raised the question [of] whether this might be due to mutual inhibition of bitter taste receptor responses,” Behrens said to Science Daily.Sugars are more simplistic molecules than proteins, which may make Amai’s discovery and its future application revolutionary.Amai is just one of several start-ups looking to explore this diverse and growing market. Food companies want to claim a share in the almost $90 billion sugar market. Many are looking to convince consumers of the negative effects of sugar – from obesity to cardiovascular disease, and thereby create demand for plant-based or natural-based substitutes.Currently, there are some 270 food tech companies in Israel, but only a few are testing new alternatives to sugar. Since sugar is such a crucial ingredient in many foods and drinks, it contributes to 184,000 deaths per year worldwide, according to a study released in 2015.Better Juice, another start-up, is developing fruit juice, which is low in sugar by converting the sugars into dietary fibers.Lampados International is working on an alternative made of prebiotic fibers and vegetable proteins.Unavoo produces an alternative composed of stevia and another sweetener made from the fiber of acacia trees. The sweetness of the acacia fiber helps balance out the bitter aftertaste of the stevia.Currently, Amai is in the R&D stage and will not be available for another two years, according to its CEO. However, it is in talks to collaborate with many other beverage makers, such as
SodaStream, and is working to provide non-sugar or flavors lower in sugar for the company.Many who are looking to find alternatives to sugar are also concerned with receiving positive feedback from customers.“You can develop a very healthy product, but if the consumer experience isn’t great and the food isn’t tasty, they won’t buy it a second time,” Tammy Meiron, the head of the Amai food technology department, told JTA.