Over 700 students from all over Europe participated in the debating competition where the Israeli team was declared the ESL champions. 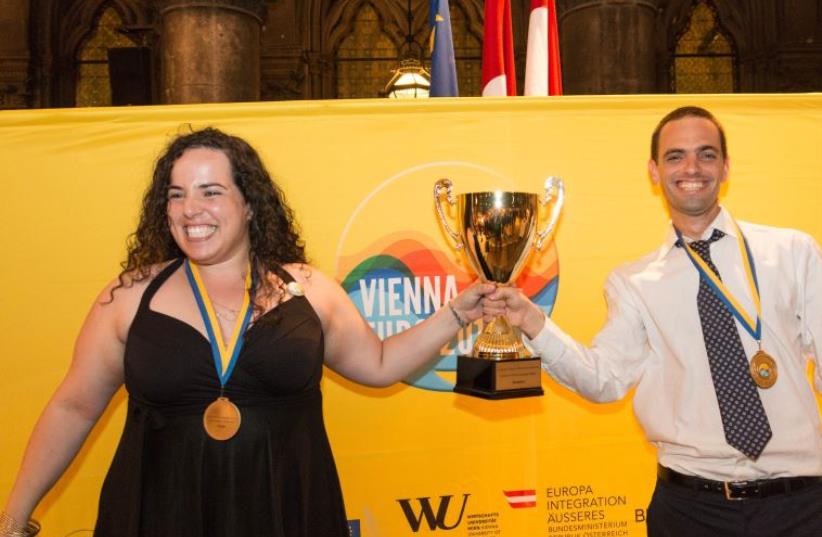 Tel Aviv University Debating Society wins first place at European Universities Debating Championships
(photo credit: MANUEL J. ADAMS)
Advertisement
Stav Singer and Iddan Golomb, a pair of debaters from Tel Aviv University, brought home a gold trophy from the European Universities Debating Championship that took place in Vienna over the past week.More than 700 students from all over Europe participated in the debating competition, vying for prizes in two language categories – English as a first language (EFL) and English as a second language (ESL). Singer and Golomb were declared champions in the latter category.Six Israeli teams made it into the knockout rounds of the ESL tournament: Three teams from Tel Aviv University, a team from Ben-Gurion University of the Negev, a team from the Technion-Israel Institute of Technology, and a team from the Hebrew University of Jerusalem.Dan Lahav and Ayal Hayut- Man from Tel Aviv University also made their way to the grand finals of the EFL category, a rare achievement for non-native English-speaking teams.“The competition at the European debating championship was an incredible experience. I have no appropriate words to describe the excitement we felt when we were on stage during the final [debate] and the whole auditorium cheered for us,” said Singer.“We had the privilege to represent our university and the State of Israel at one of the largest student events in Europe today, if not the largest,” she added.Michael Shapira, a former Haifa University debater and European debate champion, served as chief adjudicator at the tournament.In an academic world where Israeli institutions are facing boycotts, the world of debating has great respect for the Israeli teams and adjudicators.“In general, the judges come from all over Europe, and represented a remarkable variety of nations and academic institutions in Europe. However, in the list of top-quality judges, meaning those who are more likely to be found chairing an important panel or judging a final, it would be very difficult to overlook the amount of Israelis,” Shapira said.“This is no fluke, Israel has done very well producing judges that are respected throughout the international debating world for their fairness, keen observation skills and ability to give helpful and insightful feedback."“The presence of an Israeli in the chief adjudication team as deputy chief adjudicator has become a staple of the European debate championships for the past few years. The tournament last weekend marked the first time a foreign host chose an Israeli to lead the adjudication team – we expect this to continue,” he added.Ohad Davidow, the chairman of the Israeli University Debate League, was also proud of the week’s accomplishments.“We are very proud and thrilled of our teams’ and adjudicators’ achievements, which they accomplished through intense hard work and perseverance. It is truly great to see so many students from around Europe gather for an activity that looks beyond borders and boundaries, and to stand side by side while cheering Israelis and Europeans alike for their hard-earned victories,” he said.“It is also great to be part of such a community as the European Debating League, that welcomes all and that enables us as Israelis to express ourselves and discuss a myriad of topics and issues that are so important to our lives,” he added.