Chaim Winternitz will never forget the twin blasts that shook Brussels’s Zaventem Airport on March 22, leaving him paralyzed with 17 shrapnel wounds across his entire body. 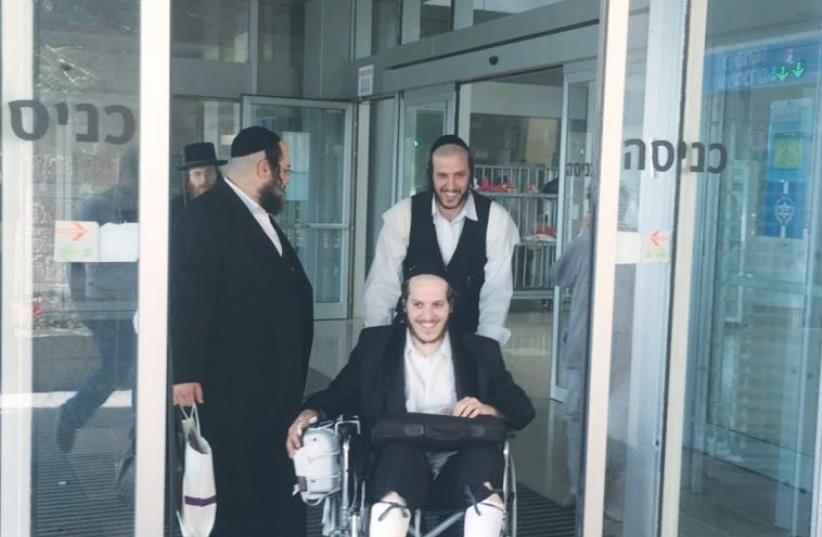 CHAIM WINTERNITZ is wheeled out of Jerusalem’s Hadassah-University Medical Center in Ein Kerem
(photo credit: HADASSAH)
Advertisement
Chaim Winternitz will never forget the twin blasts that shook Brussels’s Zaventem Airport on March 22, leaving him paralyzed with 17 shrapnel wounds across his entire body, a broken leg and damaged hearing. Last week, barely a month later, the 28-year-old Jerusalem man left Hadassah-University Medical Center’s orthopedic department in Ein Kerem to celebrate Passover with his wife and five children.Winternitz, who will begin a lengthy process of physical therapy at the hospital after the holiday, credits the Jerusalem- based charity Saad V’Marpe for its assistance.The organization, founded in 1997 by Chaim Mordechai “Motti” Fried, the father of seven and a Belgium native who made aliya 20 years ago, seeks out the wounded and the infirm, and provides them help including paying for medication, filling out medical forms, and paying for transportation to and from treatment.On most days, Fried walks the corridors of hospitals like Shaare Zedek Medical Center and Hadassah looking for patients to assist. But March 23 – the day after the Brussels attacks – he flew to Amsterdam and then drove to Brussels, looking for Israelis wounded in the explosions. Ten days later he flew Winternitz and his brother, Mendel, on a private plane back to Israel.While Chaim will return to Hadassah for physical therapy, Mendel – who suffered severe burns in the attack – also faces a long period of ongoing treatment at Hadassah after the Passover holiday. The brothers were part of a group of 20 Belz Hassidim from Belgium and Israel who were at the airport during the attack.Fried praised the medical attention in Belgium, but said “the care given to trauma and terrorism victims at Hadassah, I think, can’t be compared to anywhere else in the world.”Fried said this was the first time in the organization’s two decades of service that it has flown abroad to bring terrorism victims back to Israel for treatment.“For 20 years we have been helping people in emergency situations. In cases where it happens outside the country, we have to help our brothers”, he said.Chaim Winternitz thanked Fried and Saad V’Marpe. “There aren’t enough words to explain what he did for me and for us. From the big things to the little ones also.”