Spots are open for three separate delegations of 10 to 12 passengers to participate in the eight-day trips scheduled for June 2018. 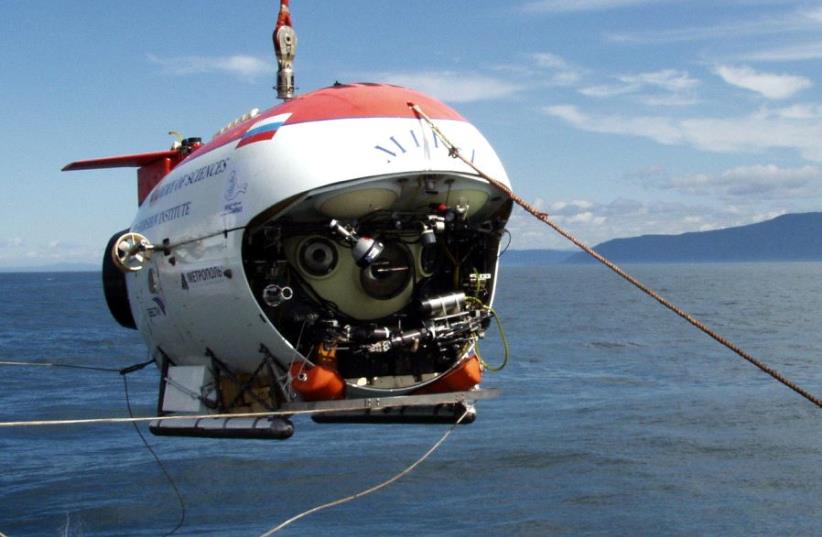 The manned submarine passengers will board to explore the Titanic 3,800 meters under the sea.
(photo credit: Courtesy)
Advertisement
A trip being marketed in Israel allows passengers the unique opportunity to explore the dark depths of the Atlantic Ocean and see the wreckage of the RMS Titanic, the infamous British passenger ship that sank in 1912. There’s only one catch: the $105,000 price tag.Spots are open for three separate delegations of 10 to 12 passengers to participate in the eight-day trips scheduled for June 2018. Travelers will submerge to a maximum depth of 3,800 meters to visit the sunken ship. During the trips, passengers are expected to take an active part in research tasks, learn about the technology making the experience possible and take part in collecting data about the ship.The trips are being organized jointly by Israeli tour company Geographic Society and US tour company Bluefish, and the submarines are operated by the Moscow-based P.P. Shirshov Institute of Oceanology.According to a statement by the Geographic Society, the trips will cost $105,000, but the tours are also being advertised directly on the Bluefish website for $60,000. The Jerusalem Post was unable to obtain an explanation for the difference in price by press time.According to the Geographic Society, the submersibles, which can hold four people at a time, are the world’s only manned submarines that can reach a depth of 4,000 meters and are not government-owned.The submarines also have the largest windows of any other submarine for viewing the deep sea.The eight-day trips depart from St. John’s in Newfoundland and include seven days at sea with researchers on the Russian research vessel Akademik Mstislav Keldysh.The journey to the depths of the ocean takes approximately 90 minutes in total darkness. Travelers will then cruise the ocean bottom for four hours, with high-powered lights illuminating the wreckage and the unusual sea life that populates those extreme depths.After sinking in 1912, resulting in the deaths of approximately 1,500 passengers and crew, the Titanic was detected in 1985. Most of the previous research was done using sonar, robots or unmanned submarines and only a small number of people have descended into the depths to see the wreckage in person.Besides an expensive price tag, passengers must be 18 years or older, be able to pass through the entrance to the submarine, which is 54 cm.in diameter, and be able to “live on a ship under favorable but not luxurious conditions for at least a week.”In announcing the tour on Thursday, Geographic Society CEO Raanan Ben-Bassat said he is “proud to be project partners with [Bluefish CEO] Steve Sims” and promised to “continue to offer our customers unconventional ideas that will enable unabated extraordinary experiences.”