Major "G", an immigrant from Ukraine talks to 'The Jerusalem Post' before his first flyover. 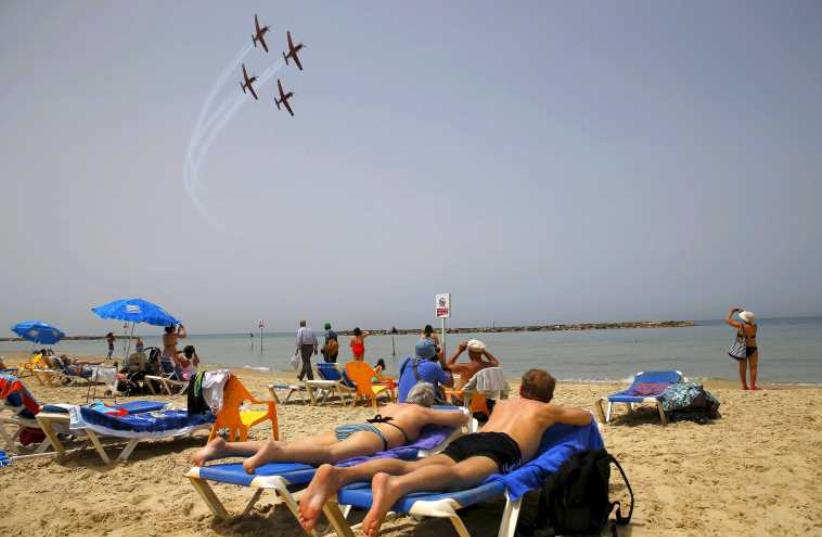 Beachgoers watch the Israeli Air Force Aerobatic team rehearse over the Mediterranean Sea in preparation for an aerial display on Israel's Independence Day in Tel Aviv April 20, 2015.
(photo credit: REUTERS)
Advertisement
Pilots of Israel’s Air Force salute the country and it’s citizens every Independence Day in the annual flyover. For Major “G”, one of the pilots set to fly in this year’s flyover, the skies of Israel are far away from the skies he looked up towards as a child.Major “G”, whose full name is not allowed to be published according to military procedures, moved to Israel from the Ukraine at the age of 15. “It’s going to be one of the most meaningful things I will ever do,” he told The Jerusalem Post ahead of the holiday.

You know Yom Haatzmaut is coming when these guys are flying outside your @Jerusalem_Post office window. pic.twitter.com/uasPxhKwUy
— Yaakov Katz (@yaakovkatz) April 26, 2017


Partaking in his first Independence Day flyover in an F-15 “Ram”, he told The Post that he believes he “will feel extremely proud, not only to be part of the air force but also pride as a citizen of Israel that we have such an airforce.”“To fly over the entire country and know that all of these people are watching us, it’s important for us as pilots,” he said. But, “while it is important for all pilots who take part, for me, as someone who wasn’t born here, it’s even more important,” he added.Military parades for Israel’s Independence Day were held every year for 20 years, between 1949 and 1968. In 1973, on occasion for Israel’s 25th independence anniversary another one was held.  It was the last one.  Last year Prime Minister Benjamin Netanyahu suggested bringing back the parades, referencing those he watched as a child and telling the crowd at an event honoring 120 outstanding soldiers that “a military parade on Independence Day in Jerusalem - that's the basis of our independence, those soldiers."But with parades such as these unlikely to return, all that remains are the Air Force flyovers. And according to Major “G” it’s imperative that they continue, especially at a time with so much discord in the country, he said.