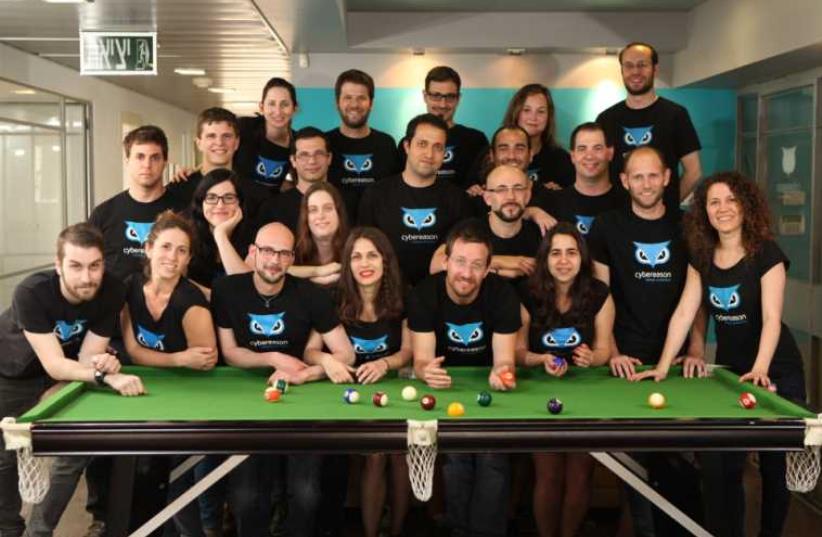 The Cybereason team in its Tel Aviv offices.
(photo credit: CHEN GALILI)
Advertisement
Tel Aviv and Boston based cyber security firm Cyberreason has secured an estimated $10 million investment from the Israeli branch of defense firm Lockheed Martin, part of a $25 million series B fundraising round it announced Wednesday.The strategic investment, Lockheed Martin Israel’s first, comes alongside Lockheed’s decision to start using the company’s software for its 120,000 endpoint users, and resell it to its own customers. Lockheed Martin Israel CEO Joshua Shani called the investment “a significant step” in the company’s mission to become a leader in the Israeli market.Cybereason, which already has major clients in the field of defense, finance, manufacturing and pharmaceuticals, said distinguishing itself in the crowded space was tough.“When we approached them as a potential customer, their first response was ‘we’ve already seen it all,’” Cybereason CEO Lior Div told The Jerusalem Post. “Once they started to test it, the conversation changed dramatically.”The company’s software stands out from the pack by assuming that somehow or another, a determined hacker will be able to make its way into a company’s system, whether through an e-mail attachment, a clever phishing scheme or some other method.Once in, a sophisticated cyber attacker will do reconnaissance, expand its presence, and only after a significant period make its move.  “An attack isn’t something that lasts a second like you hear in the news. It’s a process,” said Cybereason’s Lotem Guy. On average, he said, the attack takes 210 days from start to finish. Most companies scramble once it’s too late and expend a huge amount of resources in the last 20% of the process, once the damage has been done. Cybereason’s tool monitors the entire network in real time, analyzing the huge amounts of data coming in and going out to spot suspicious behavior. In essence, it conducts its own investigations on suspicious activities, and designs its alerts in a visually compelling, easy to understand way. “The biggest problem in a lot of cyber software is its usability. The time it takes to get a user to know the software properly is generally huge,” said Guy. Cybereason forms a visual timeline of what files got onto the system, through what, what they’ve been doing since and what data they’ve sent to whom outside the network. “In Israel I can compare it to Iron Dome. No matter what we do, they will attack us. The question is, what will be the damage?” Div said.Lockheed Martin, which opened its Israel offices last year and opened offices in the Beersheba cyber security industrial park, is not the only defense company investing heavily in cyber security. In April, Rayhteon invested some $1.7 billion to acquire cyber company Websense to form a new cyber security venture.Given the sensitive nature of defense contracting, it would stand to reason that money spend to prevent, say,  a foreign government stealing classified defense plans or, worse, finding a way to meddle with them would be a good investment.Cybereason’s “real-time detection and attack tracing capabilities enable us to effectively leverage threat intelligence and provide our government and commercial customers with a calculated, strategic approach to cyber defense,”  said Lockheed Martin director of commercial cyber services Rich Mahler in a written statement.Cybereason plans on using its latest funds to expand; it is doubling its workforce, moving to a bigger Boston office, and expanding its 40-person R&D center in Tel Aviv.For Div, the prospect of an acquisition is not tempting; he envisions an IPO down the line instead.“There are many opportunities for an exit, but I think many companies do it too fast,” said Div. “We believe there is a truly unique opportunity to build a very big company.”