‘Other religious courts may fear a precedent’ 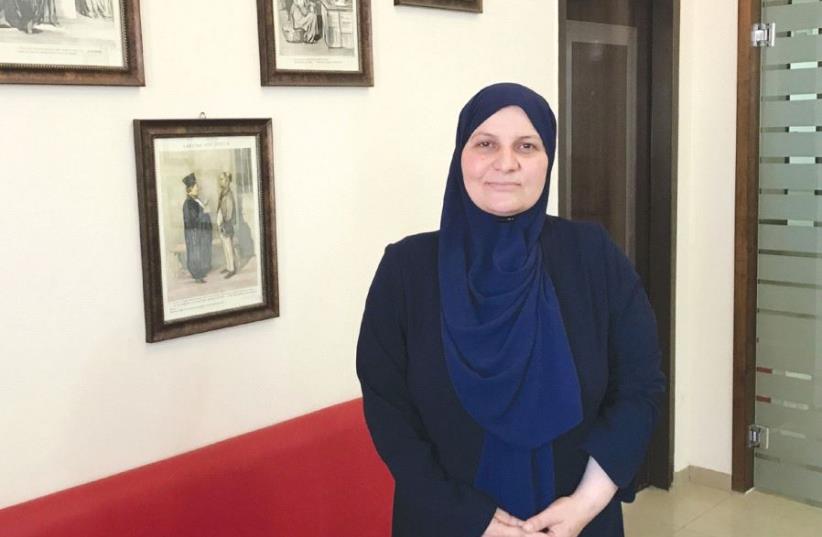 Islamic jurist Hana Mansour-Khatib poses in her office in Tamra, in the eastern Galilee.
(photo credit: ELIYAHU KAMISHER)
Advertisement
Hana Mansour-Khatib’s four children learned about their mother’s history-making accomplishment in late April from their school teachers.“It was very exciting for my children when they heard from their teachers that their mother is the first woman judge in the Shari’a courts,” said Mansour-Khatib, speaking from her office in the northern Arab city of Tamra on Sunday. “They announced the achievement over the microphone at school. It was a success for Tamra and the Arab community.”While the Shari’a court system in Israel has operated since Ottoman times and handled countless cases of marriage, divorce and family matters, in Israel’s Muslim community, no woman has had a voice in the judgments.That changed in late April when 44-year-old Mansour-Khatib was appointed as Israel’s 18th Shari’a judge or qadi.Israel’s rabbinic courts, which also handle marriage, divorce and other family matters, has yet to appoint a female judge.“There are negative attitudes maybe from the Muslim community or the rabbinic community, who do not want women judges on other religious courts,” said Mansour-Khatib.Officials of the Northern Branch of the Islamic Movement in Israel slammed the appointment as Israeli interference in Islamic affairs. The rabbinate has historically opposed female Shari’a court judges out of fear it would create precedent for Jewish religious courts.Mansour-Khatib, who studied law at Staffordshire University in England and received a master’s degree in mediation from Bar-Ilan University, is adamant that the sex of Shari’a court judges does not impact their rulings.“It’s a matter of handling the facts that are laid down in front of the judge,” she said.Israel’s newest qadi is hopeful that her position will help women feel more comfortable expressing themselves in male-dominated courtrooms. “A lot of girls start the first trial and finish the 9th or 10th trial with out expressing a word. She says, ‘This is the position of my father,’” explained Mansour-Khatib. “We aren’t against being consulted by parents, but we are against, and I as a judge am against, controlling the personal decision for a woman.Hearing women’s voices in court is the first step to empowering and ensuring their legal rights, she said.Mansour-Khatib added that in Israel, Muslim women often prefer Shari’a courts to civil ones because decisions are reached more quickly in custody and alimony cases.Mansour-Khatib also hopes to change what she says is the Shari’a judges’ dependence on welfare case workers’ reports to determine family custody issues.“These reports became the main evidence,” she said.“The reports need to be more transparent,” she continued, adding that the courts sometimes make “automatic decisions” from a welfare report without fully hearing the sides in court.As a specialist in Islamic family law, Mansour-Khatib has dealt with the legal fallout of many failed marriages, yet, she counts her marriage to a supportive husband as one reason for her success.Fouad declined to be interviewed, but the German-trained real estate and bankruptcy lawyer is arguably his wife’s main advocate.“He could have been in the courses, pursuing a second degree.But he gave me the priority,” said Mansour-Khatib as Fouad, reading legal documents, threw a thumbs up. “He could have this place, and I could be in the kitchen.”