The Italian daily La Stampa quoted advisers to Netanyahu as saying that Saudi Arabia, the UAE and Egypt asked Israel to press Washington against the Iran nuclear deal. 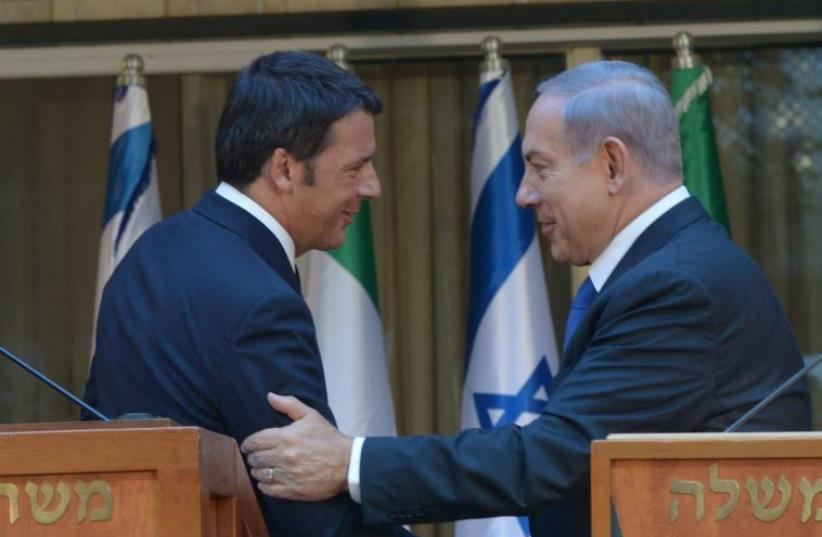 Prime Minister Benjamin Netanyahu meets Italian Prime Minister Matteo Renzi
(photo credit: AMOS BEN-GERSHOM/GPO)
Advertisement
Italian Prime Minister Matteo Renzi is a key partner in the struggle between “freedom and oppression, between day and night,” Prime Minister Benjamin Netanyahu said in Florence on Friday.Netanyahu’s comments came during a meeting in the city with the leaders of the Italian-Jewish community, which numbers some 24,000 people. He met Renzi in Florence – the Italian premier’s hometown – late Saturday night.The Italian daily La Stampa ran a story quoting advisers to Netanyahu as saying that many countries in the region – including Saudi Arabia, the United Arab Emirates and Egypt – have asked Israel to press Washington against the Iranian nuclear deal.According to the story, Netanyahu continues to fight against the Iranian deal, even though the likelihood that there will be enough votes in the US Congress to override a presidential veto are very slim, because he is looking at the day after US President Barack Obama’s second term and the possibility that the next president may roll back the deal.According to this report, there was a message there for Italian companies running to do business with Iran: Though they may have “easy pickings” in the short term, in the long run this could be counterproductive.A number of voices have been heard in both Washington and Jerusalem saying that businesses may be reluctant to rush into Iran until after the swearing-in of a new US president on January 20, 2017. They are cautious of the next president’s possible rolling back of the agreement, which might mean that if they do business with Iran, they could risk ties with US firms.Netanyahu, who on Thursday visited the Israeli pavilion at the Expo Milano 2015, told the local Jewish community leaders that the world believes in Israeli technology, and that science and technology are stronger than any attempt to boycott Israel.The Milan-based paper Corriere della Sera ran a picture of a graph on taxes that Netanyahu drew on the back of a menu during a dinner Thursday night with head of the expo Giuseppe Sala, and the commissioner of the Italian exhibition, Diana Bracco. The graph, the Laffer Curve, shows how increasing tax rates beyond a certain point is counterproductive for states trying to raise revenue.According to the report, Netanyahu took pen to menu when the conversation turned to the high taxation rate in Italy.“We were able to cut the tax rate from 36 percent to 25% and tax revenue has grown,” Netanyahu said.Bracco asked if she could keep the graph written on the menu, to which Netanyahu was quoted as saying, “Of course, it’s no secret.”