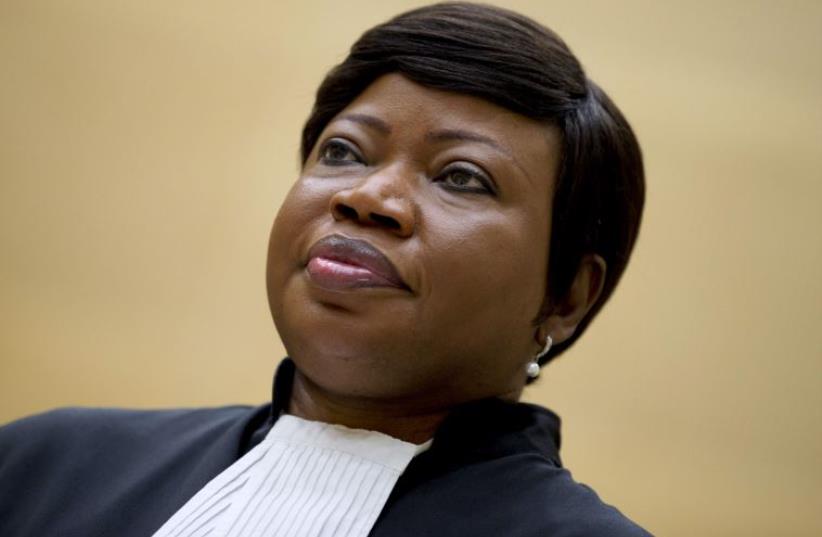 Prosecutor Fatou Bensouda
(photo credit: REUTERS)
Advertisement
Israel in the last few days felt the sudden trembling fear of what might occur if the International Criminal Court were to issue a war-crimes verdict against its to leaders.High at risk would likely be the two top contenders for the premiership, Prime Minister Benjamin Netanyahu and his chief rival, Blue and White Party head Benny Gantz, who is also the former IDF chief-of-staff.The reality is, however, that an actual trial and verdict is likely years away, in spite of ICC chief prosecutor Fatou Bensouda’s dramatic announcement she believes war crimes were committed in Gaza, east Jerusalem and the West Bank. It is even possible the case could be dismissed within 120 days, when the pre-trial chamber rules on the matter of ICC jurisdiction.Or the US, a strong ally of Israel, may find a way to strong-arm the court behind the scenes, as it did with Afghanistan.A delay or a dismissal on technical grounds may assuage the fear of seeing Israelis on the docket at The Hague. Put in real time, however, the impact of Friday’s dramatic statement by ICC chief prosecutor Fatou Bensouda is less the legal process that will follow but rather the way the words appear to confirm in the court of public opinion what many fear, that Israeli action could at some later date be considered war crimes.Upon learning of Bensouda’s statement, the Jewish progressive NGO IfNotNow tweeted, “we can’t wait for ICC judgment before we act, the world must hold ICC accountable.”That is because the link between alleged Israeli war crimes and Israeli is already a part of the UN vernacular when it comes to discussing the Jewish state.United Nation member states, led by the Palestinians and Arab states, have for years used international venue to accuse Israel of war crimes, with UN investigators warning those with business or defense ties with the IDF or entities over the pre-1967 lines may be themselves be engaging in war crimes.Among the most famous report to accuse Israel of possible war crimes, was that of the UN Human Rights Council’s Goldstone Report, which looked at Israeli actions during Operation Cast Lead in December 2008 and January 2009. Even when Goldstone himself said he regretted the report in 2011, the charge lingered.The latest-such report was published in February of this year, with possible war crimes accusations against IDF soldiers for their actions against Palestinian protesters along the Gaza border fence. The report specifically recommended arrests of Israelis leaders and soldiers, travel bans and a freezing of assets.The UNHRC has already twice called for an arms embargo against Israel, warning of sales of weapons to Israel could be used to for human rights violations.Bensouda’s statement gives new life not just to those reports and resolutions, but also to the efforts of the Boycott, Divestment and Sanctions  Movement, which uses the subtle threat of war crimes involvement to help drive its point home.Bensouda’s comment is particularly timely, coming in advance of the highly-anticipated UNHRC blacklist of companies doing business with Israeli entities in the West Bank, east Jerusalem and the Golan Heights. The list is designed to warn companies they could be engaged in war crimes, a case now much easier to make, in hopes that they will agree to cease such activity.The list had been due out in December, but has been routinely delayed, and Israel has hoped behind-the-scenes pressure would prevent its publication all together.Just last month, the European Court ruled all Israeli products produced over the pre-1967 lines, which it views as settlement products, must be labeled as such, so the legal issues are clear to the consumer.Israeli has waged a counter initiative to push forward legislations linking BDS with antisemitism and those who do engage in Israeli boycott run the risk of running afoul of US anti-boycott laws.But Bensouda’s comments raise the stakes slightly for those who want to commercially engage with Israel but who fear the long arm of international law.