J Street to Trump: One state is the problem, not a solution

Trump is the first US president in at least two decades to refrain from pledging total allegiance to the idea of a two-state paradigm. 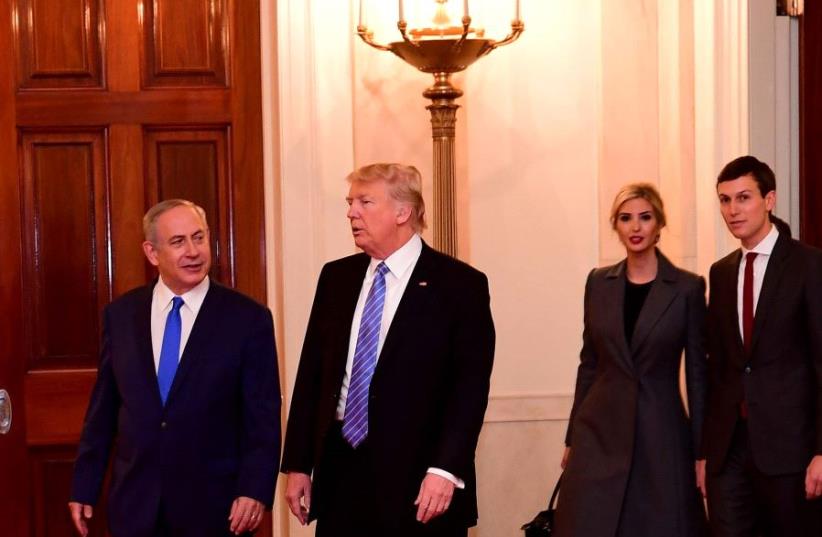 Benjamin Netanyahu meets Donald Trump at the White House
(photo credit: AVI OHAYON - GPO)
Advertisement
NEW YORK - The left wing Jewish organization J street expressed its “deep concern” after US President Donald Trump and Prime Minister Netanyahu avoided endorsing a two-state solution at their joint appearance in Washington on Wednesday.During the leaders’ opening statements, they vaguely answered questions on the subject and President Trump even indicated that he considers a one-state configuration to be a plausible outcome of the conflict.“I'm looking at two states and one state. I am very happy with the one that both parties like. I thought for a while the two state might be easier to do, but honestly if Bibi and the Palestinians, if Israel and the Palestinians are happy, then I am happy with the one they like the best,” he said.Trump is the first US president in at least two decades to refrain from pledging total allegiance to the idea of a two-state paradigm and to open the door to the possibility of alternative ideas to achieve peace between Israeli and Palestinians, as well as in the wider region.“This statement flies in the face of established American policy and will undoubtedly create damaging confusion among our allies and adversaries,” J street wrote in a statement. “We’ve known for some time that Prime Minister Netanyahu is not seriously interested in pursuing a two-state solution. But it was tremendously disturbing to hear the President of the United States fail to recognize that only with Palestinian independence can Israel remain both Jewish and democratic.”According to J street, Trump’s statement that was “both meaningless and dangerous” and essentially “removed the anchor that has steadied and stabilized US policy toward the region”.“How can there be a negotiation, let alone an agreement, when there is no longer a consensus on what the end goal should be?,” they said. “To be clear, there is no one-state configuration that leads to peace. There is no resolution to this conflict without full political rights and independence for both peoples.”The organization added that “all so-called ‘one-state solutions’ are recipes for more violence that will ultimately threaten Israel’s identity as a democracy and a Jewish homeland” and that the two leaders “seemed detached from reality”.They added that President Trump’s vagueness on this issue will likely dismay key allies of the US in the Arab world and will embolden extremists within Israel, among Palestinians and throughout the region.“Prime Minister Netanyahu, for his own narrow political reasons, may be pleased by what has transpired,” the statement continued. “It is vital for President Trump to renew the commitment that President George W. Bush made in 2002 to support a solution to the conflict between Israelis and Palestinians resulting in two states living side-by-side in peace and security.”