Hapoel got its Eurocup campaign back on track last week with a dramatic 92-90 victory over Krasny Oktyabr Volgograd of Russia. 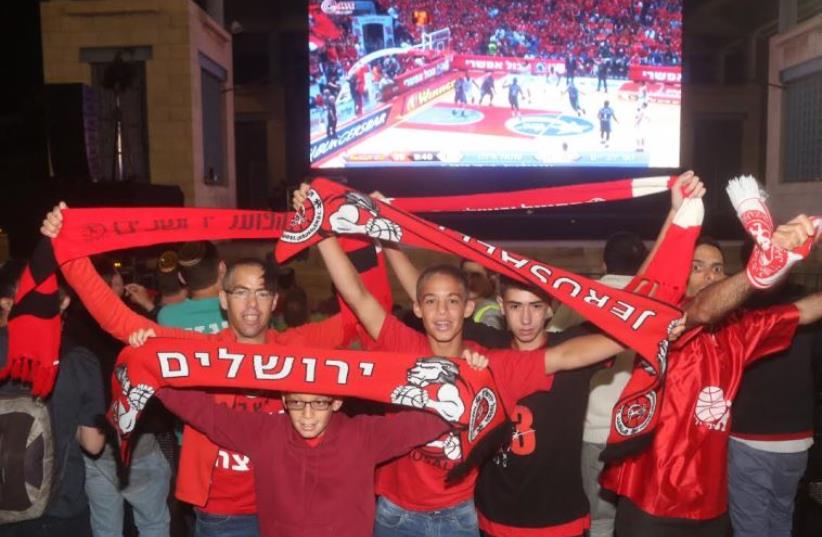 Jerusalem basketball fans gather to watch big game.
(photo credit: MARC ISRAEL SELLEM)
Advertisement
In the midst of its first BSL losing streak in almost a year and with an injury crisis crippling the roster, Hapoel Jerusalem hosts Nizhny Novgorod on Wednesday night in a crucial Eurocup contest at the Jerusalem Arena.Hapoel got its Eurocup campaign back on track last week with a dramatic 92-90 victory over Krasny Oktyabr Volgograd of Russia, benefiting from a massive slice of luck after the visitors missed a dunk at the buzzer which would have sent the game to overtime.Jerusalem improved to 2-3 at the midway point of the regular season after overcoming the absence of Lior Eliyahu and Yotam Halperin and an injury to Josh Duncan, who left for the dressing room with a concussion in the first half. Eliyahu and Halperin will also be out against Novgorod, but Duncan will be fit to play in another continental contest Jerusalem can scarcely afford to lose.After opening its BSL title defense with four consecutive wins, Hapoel dropped to its second straight defeat on Sunday, falling 72-67 to Ironi Nahariya.Danny Franco’s side hadn’t lost consecutive games in the BSL since last December, but it will cast its local troubles aside on Wednesday as it focuses on maintaining its perfect home record. Hapoel is 5-0 over all competitions at the Jerusalem Arena this season.Novgorod beat Hapoel 92-71 in their first meeting of the season in Russia, dominating the second half after coming back from a double-digit deficit in the first. Nizhny is also at 2-3, entering Wednesday on the back of a three-game losing streak.“We struggled to cope with their style of play in Russia,” admitted Franco on Tuesday.“We will try and change some things in order to cope with them better. We have had to make adjustments due to all our injuries, but that is life and I’m not looking for any excuses.”Maccabi Rishon Lezion can take a significant step towards securing its progress in the Europe Cup when it hosts Kalev/ Cramo Tallinn on Wednesday.Rishon improved to 2-1 with last week’s win over Lukoil Academic Sofia and will be confident of overcoming Tallinn, which has lost all three of its games in the competition so far, including to Rishon in Estonia.“Every game is important and every win brings us closer to our goal,” said Rishon’s Chris Wright, who is averaging a team-high 18.0 points per game in the competition. “We know we can’t take them lightly and need to maintain our focus and composure in order to win the game.”