The Jerusalem Municipality's chief engineer Shlomo Eshkol had slammed the program for not following the guidelines of the city's urban renewal plan. 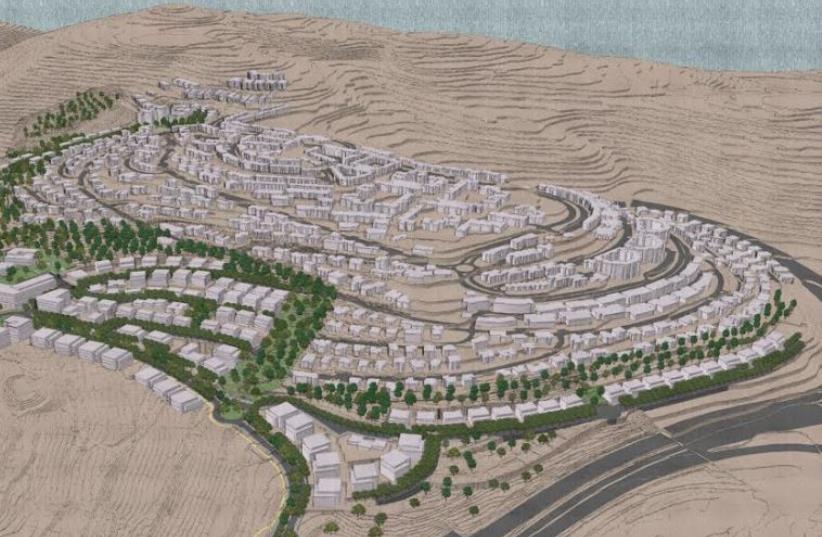 Renderings of ramot slopes.
(photo credit: ISRAEL LANDS AUTHORITY)
Advertisement
Jerusalem officials and members of the public met Tuesday to air their grievances over a plan to build a new neighborhood on the green hillside of Mitzpe Neftoah (Lifta). Perched high at the city’s western entrance, it is one of the few untouched nature spots in the city and home to hundreds of wild plant species and animals, such as foxes and gazelles.In November, the National Planning and Building Committee approved the National Board for Prioritized Residential Projects (VATMAL)’s Plan 1012. It aims to build 1,400 housing units on the 4.1 hectare (10 acre) hilltop.Building the new neighborhood, the plan’s managers claim, is necessary to lowering the cost of living in the capital.However, most of those present at the meeting argued that the plan will fail to alleviate housing issues and cause severe environmental damage to the hillside, which overlooks Emek Ha’arazim (Cedar Valley).“Everyone says this is a big mistake,” Jerusalem Deputy Mayor Tamir Nir told the panel, after speaking about the Jerusalem’s “debt” to residents to improve existing neighborhoods.“Continuity depends on environment, community and finance.Regarding these three factors, this plan is almost completely unsuccessful.”Though earlier in the meeting, representatives from the planning team, lead by Ari Cohen, appeared confident and talkative. Their demeanors noticeably changed while Nir and other city officials heavily criticized their initiative.Speaking to The Jerusalem Post afterward, Nir said that although the current municipality is very much opposed to the plan and could have the power to overturn it, that opinion could easily change with a new city government. He also apologized to Cohen for his harsh criticisms during the proceedings, noting “it’s nothing personal.”The Jerusalem Municipality’s chief engineer, Shlomo Eshkol, slammed the plan as well, mainly for not aligning with the city’s urban renewal program, focusing on development in the city center and along the light rail. Eshkol said the proposed neighborhood is “completely nonessential” since it does not fulfill either criteria.“We need to focus our power where we can make an impact – not toward urban sprawl,” Eshkol said.Yesh Atid MK Mickey Levy was among the Knesset officials to speak out in opposition. He said it was irrational to build a new neighborhood so far from the city center. “The plan costs four times that of the average urban [construction project],” he said.“That’s in addition to the unnecessary and intolerable health and environment harm...if the plan goes through, then the government will look to take powers away from the VATMAL.”Zionist Union MK Yael Cohen-Paran said that the plan will only worsen the city’s “lack of open space” in addition to the ecological downsides. The most environmentally friendly plan, before taking away more green spaces, would be to improve existing neighborhoods and reduce the need for private vehicles, she explained.She said that the Mitzpe Neftoah neighborhood would fail on all these counts. “We’re trying to lower apartment prices, but requiring each one to have two cars,” she said. “The cost of the cars each month, thousands of shekels, is more than the cost of the mortgage.”Refuting the claims that Jerusalem desperately needs cheaper housing, Hebrew University professors Yoram Meishar and Avi Ben-Bassat presented figures showing that Jerusalem housing prices have not changed as dramatically as in other parts of the country. For example, while prices in Jerusalem have risen by 49 percent since 2008, they have risen by 86% in Tel Aviv during the same period.Four additional public sessions about the proposed neighborhood are scheduled to take place on June 2, 7, 13 and 14 in the Bayit Vegan Guest House auditorium in Jerusalem.