The High Court on Monday rejected an appeal filed by two nongovernmental organizations attempting to prevent the procession through the Muslim Quarter. 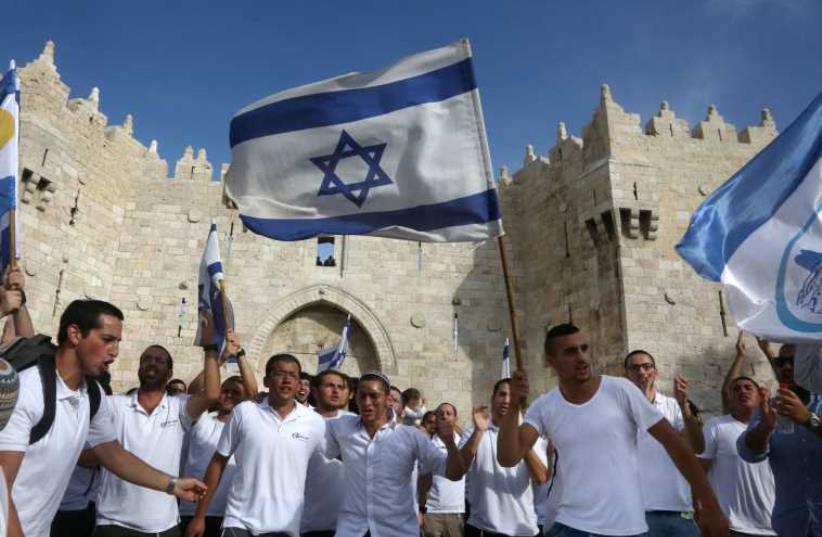 Jerusalem Day celebrations
(photo credit: MARC ISRAEL SELLEM/THE JERUSALEM POST)
Advertisement
Meretz chairwoman Zehava Gal-On on Sunday condemned the traditional flag-waving procession on Jerusalem Day, which she characterized as “a violent, racist act of provocation against Arab residents” of the capital.The procession has been criticized by left-wing groups and human rights organizations who say that its route through the Muslim Quarter of the Old City has resulted in vandalism against shops and calls for “death to Arabs.” The High Court on Monday rejected an appeal filed by two nongovernmental organizations attempting to prevent the procession, which is scheduled to take place at 4:00 p.m. local time. Jerusalem Day is the annual commemoration of Israel's reunification of the capital during the course of the 1967 Six-Day War.The petition against the Sunday march was filed by the left-wing Ir Amim organization and the Tag Meir group – which was founded as a liberal response to “price tag” groups – against the right-wing group A Nation of Lions, the Jerusalem Municipality and the police.
Jerusalem Day prayer at Western Wall (Video: Hadashot 24)
It claimed that past marches had been so violent and provocative that the case met the high standard for limiting persons’ right to march in a certain area.While rejecting a petition with a “heavy heart,” Deputy Supreme Court President Elyakim Rubinstein also warned the police that any marchers who call for “death to Arabs” should be immediately arrested.The High Court of Justice said that there was “zero room for tolerance for those provoking violence, verbally or physically.”Rubinstein explained that calling for violence against Arabs and vandalism in the context of the march were not “freedom of speech” but “freedom to incitement” and could not be allowed by the police.“Jerusalem can be and should be a city of coexistence, fraternity, pluralism, and peace,” Gal-On wrote on her Facebook page. “When the holiest city in Judaism, Christianity, and Islam becomes such a city, then we can celebrate the Jerusalem Day that we deserve.”“It is outrageous to see far-right elements take over Jerusalem Day and turn it into a day that has entirely become a racist, violent act of provocation against the city’s Arabs,” she said. “The ‘flag procession’ in the Muslim Quarter of the city is an aggressive show of force whose entire purpose is to jab a finger in the eyes of the Palestinians.”“Those officials who allow this disgrace to go forward do this in order to remind everyone who are the lords of the land and how easy it is for them to come in, rampage, and go wild,” the Meretz leader said.Israel’s most senior clerics, including yeshiva heads and chief rabbis, held a special Jerusalem Day prayer at the Western Wall attended by thousands of worshippers Sunday morning.