"It is a mistake to approve construction in Jerusalem only after a terror attack," says mayor; Elkin calls on PM to build more homes in Givat Hamatos to block contiguous Palestinian state. 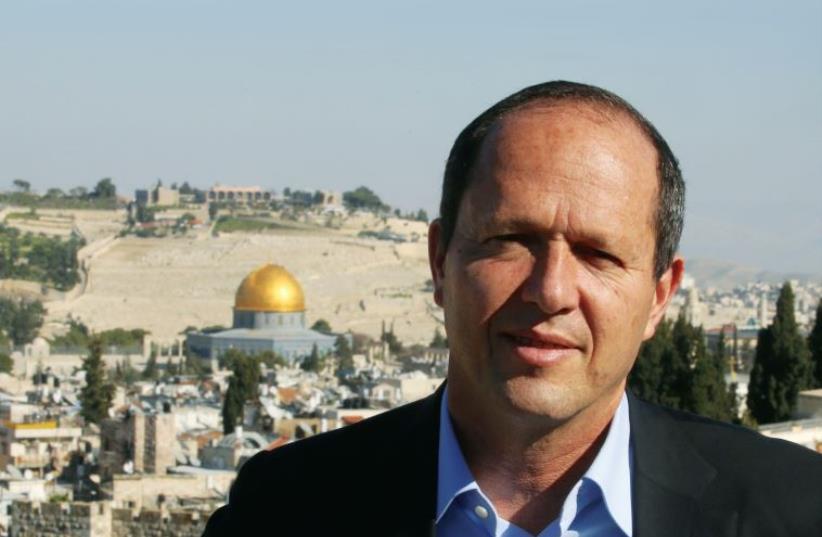 Mayor Nir Barkat at the Jerusalem Marathon press conference this past March
(photo credit: MARC ISRAEL SELLEM)
Advertisement
Prime Minister Benjamin Netanyahu’s announcement approving 240 Jewish homes beyond the pre-1967 lines in the east Jerusalem neighborhoods of Ramot and Har Homa, and 600 Arab homes in Beit Safafa, was met by a chorus of critics on Monday.Deeming the decision reactionary following the recent spate of deadly terror attacks in the West Bank that took the lives of Hallel Yaffa, 13, and Rabbi Miki Mark, Jerusalem Mayor Nir Barkat condemned the practice of building as retaliation.“It is a mistake to approve construction in Jerusalem only after a terror attack,” said Barkat at the opening of the 2016 Yesha Conference Monday morning. “We need to build in Jerusalem always.”“We cannot give in to the terrorists, they must pay a price,” added the mayor, who recently joined Likud, and is rumored to be considering a run for the premiership. “We must give building permits: Allow people to build, and don’t stop the permits, or accept them after terror attacks.”Barkat, who has long contended that construction approval in Jerusalem is apolitical, and must not be frozen in either sector, said home approval permits should unilaterally correspond with the city’s master plan for improving its infrastructure in both the east and west.“As far as construction in Jerusalem is concerned, we have a master plan that properly addresses the needs of both the Jewish community and Muslim population, just as any other city in the world does,” he said.Moreover, Barkat dismissed any purported de facto building freezes anywhere in the capital.“We must let residents purchase homes in any place they wish,” he said. “I hear that there is a ‘building freeze’ in Jerusalem. Don’t let them scare you; construction in Jerusalem must never be stopped for any reason at all.”While Barkat’s rival, Jerusalem Affairs Minister Ze’ev Elkin, praised the approval of construction of 140 Jewish homes in Ramot and 100 in Har Homa, located in southeast Jerusalem, he called on the prime minister to expedite building Jewish homes in Givat Hamatos, which abuts Beit Safafa.Over 2,600 homes were approved for Jewish residents in Givat Hamatos by the Jerusalem Building and Planning Committee in 2014, however construction has been on hold amid charges that the community would block a contiguous Palestinian state by separating Beit Safafa from Bethlehem.Elkin Echoed Jewish Home party head and Education Minister Naftali Bennett’s warning that building 600 Arab homes in Beit Safafa would endanger a Jewish majority in Jerusalem and divide the capital.“Those who want to maintain a Jewish majority in the capital cannot promote construction for the Arab population only,” he said.Barkat, who has been at odds with Elkin since he usurped his authority for decisions involving Jerusalem’s development last year, said that the municipality should regain complete autonomy over all decisions regarding construction in the capital.
“I suggest the responsibility for construction be moved from the government to the City of Jerusalem,” he said. “We aren’t stopping any construction.”Kulanu faction head Moshe Kahlon asserted that because terror attacks are intended to engender fear, the government “has no other choice” than to build more Jewish homes in east Jerusalem, and abandon any de facto building freeze.“We need to build, and build a lot,” said Kahlon on Monday. “Over the weekend, I told the prime minister he must stop the building freeze in Jerusalem. We need to tell the truth: Jerusalem has been suffering from a quiet freeze.”According to Kahlon, this freeze has resulted in more young couples leaving the city, and undesired demographic changes, which he deemed “an inseparable part of the housing crisis.”“The theory that freezing building in the city is an Israeli interest is wrong,” he said. “We freeze while they incite. We freeze while they murder.”Meanwhile, Anat Ben Nun, Peace Now’s director of development and external relations, took the government to task for allocating exponentially fewer building permits for Palestinians than Jews since the 1967 War.  “Since 1967, the State planned 55,000 housing units for Israelis in east Jerusalem and less than 1,000 housing units to Palestinians,” Ben Nun claimed.“Even the current plan for Palestinians was put forward due to a High Court decision. As long as there is no agreement, construction for Israelis in east Jerusalem is illegitimate and harmful to the possibility to reach a two-state solution with two capitals in Jerusalem.”