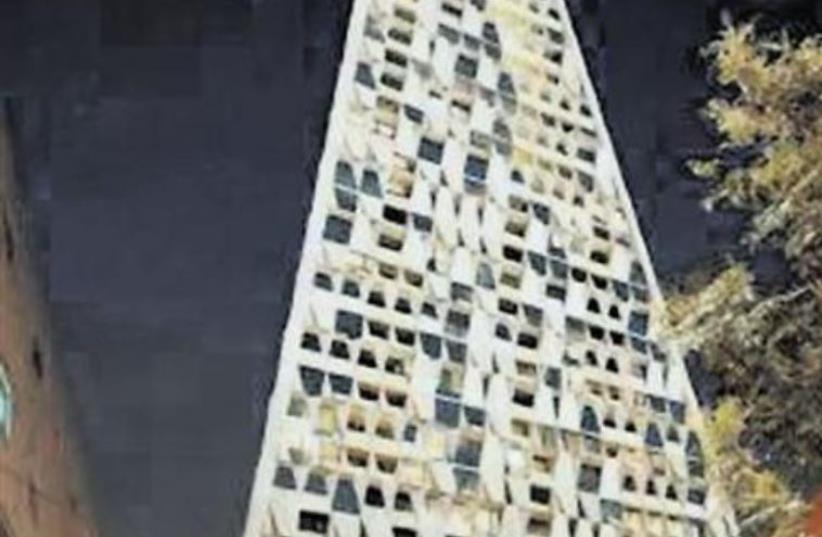 Caption: AN ARTIST’S rendering of the proposed “The Pyramid,” approved to be constructed in downtown Jerusalem.
(photo credit: COURTESY DANIEL LIBESKIND AND YIGAL LEVI)
Advertisement
The Jerusalem Municipality has approved plans for a sprawling 26-story luxury hi-rise residential building adjacent to the Mahane Yehuda market, featuring hotel space, high-end retail shops, and a rooftop fine dining restaurant.The complex, called the “The Pyramid,” is being designed by celebrated Polish-born architect Daniel Libeskind, in coordination with Israeli architect Yigal Levi, and will be built over the former Eden Theater.The 105-meter tall building will be constructed with equal parts glass and Jerusalem stone, include 35,000-square-meters of space, and contain 200 luxury apartments, a boutique hotel, and outdoor public plaza lined with upscale shops, the municipality said.Libeskind is best known for designing New York City’s September 11th Memorial and Berlin’s Jewish Museum.According the municipality, approval for construction of the hi-rise by the local planning and building committee came with the provision that it must break ground within five years, or risk losing its building permit.The plan was nearly unanimously approved, with the exception of Deputy Mayor Pepe Alalu, who argued that the height of the tower exceeded regulations.Jerusalem Mayor Nir Barkat has long championed large-scale downtown commercial construction projects as a means of revitalizing the capital’s anemic economy, creating more jobs, and attracting younger residents to the city.It remains unclear when construction will commence, or how much the project will cost.