‘Jerusalem Post’ NY conference set to be best and biggest yet 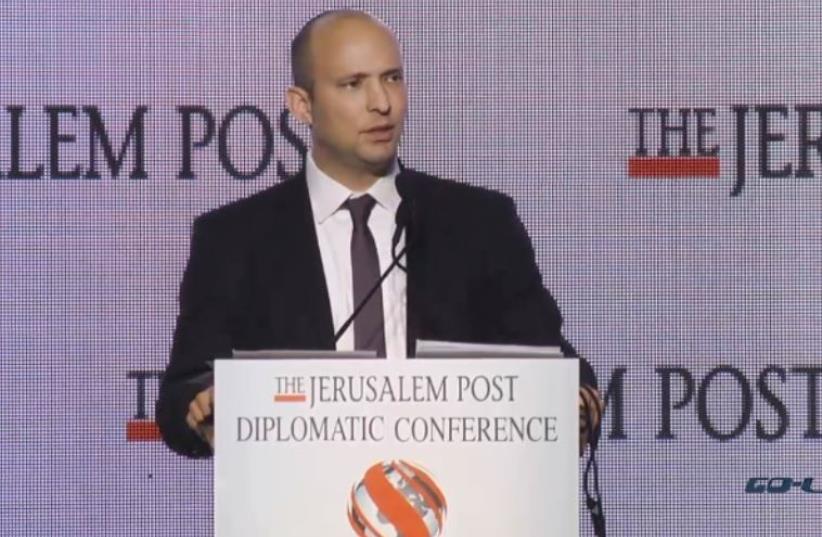 Naftali Bennett at the Jerusalem Post's Diplomatic Conference
(photo credit: Courtesy)
Advertisement
No fewer than four government ministers will highlight this year’s fifth Jerusalem Post Annual Conference in New York. The annual event, which has proved to be both newsworthy and dazzling, will be held on May 22 at the Marriott Marquis Hotel in Times Square, and is expected to attract an audience in excess of 1,000 as well as dozens of journalists.Titled, “Israel, the US and the Free World in the Shadow of Terror,” the gala gathering will feature an interview on stage with Education and Diaspora Affairs Minister Naftali Bennett, along with speeches by Social Equality Minister Gila Gamliel; Public Security, Strategic Affairs and Public Diplomacy Minister Gilad Erdan; and Transportation and Intelligence Minister Israel Katz.In addition, there will be addresses by Ambassador to the US Ron Dermer, Israel’s envoy to the UN Danny Danon and Zionist Union co-leader MK Tzipi Livni.World Jewish Congress President Ronald S. Lauder has for the second consecutive year been chosen as president of the conference, which will be hosted by Jerusalem Post Editorin- Chief Steve Linde.“We’re happy and excited about this conference, which is taking place for the fifth year running and generates so much interest around the world,” said The Jerusalem Post Group’s CEO Ronit Hasin-Hochman. “It is an excellent opportunity to hear firsthand about the issues vital to Israel and the Jewish world from senior government and military officials and the Post’s senior journalists.”The conference, which has generated international headlines in its four previous iterations, will feature timely panel discussions, including one on “The future of the Jewish people and the war against BDS [Boycott, Divestment and Sanctions],” with Yesh Atid MK Elazar Stern, CEO of the Harry Triguboff Institute Shalom Norman, and International Federation of Jews and Christians director Rabbi Yechiel Eckstein; and one on “Does the world have an answer to Islamic terror?” with Likud MK Anat Berko, former education minister Gideon Sa’ar, former IDF chief of staff Lt.-Gen. (res.) Gabi Ashkenazi and former Mossad director Efraim Halevy.The US election campaign will figure prominently in the action-packed day, with negotiations currently under way to bring leading Democratic and Republican leaders to speak.“The Post’s annual conference, which provides a meeting point for decision and policy-makers and commentators from Israel and the US, has established itself as one of the most important and central gatherings in the Jewish world today,” said Hasin-Hochman. “In accordance with our broad editorial line, we have been firm in our position of inviting speakers representing different points of view in order to offer a pluralistic spectrum of views to our audience. It’s a huge honor for the Post’s staff and for myself to host our loyal readers at this important gathering.”In addition to the newsmakers, the conference will also feature a performance by a leading Israeli entertainer.The day will be topped off with a speech by the Post’s senior contributing editor, Caroline B. Glick.More information about the schedule and tickets to the conference can be found at www.jpost.com. To avoid disappointment, tickets should be reserved as soon as possible.