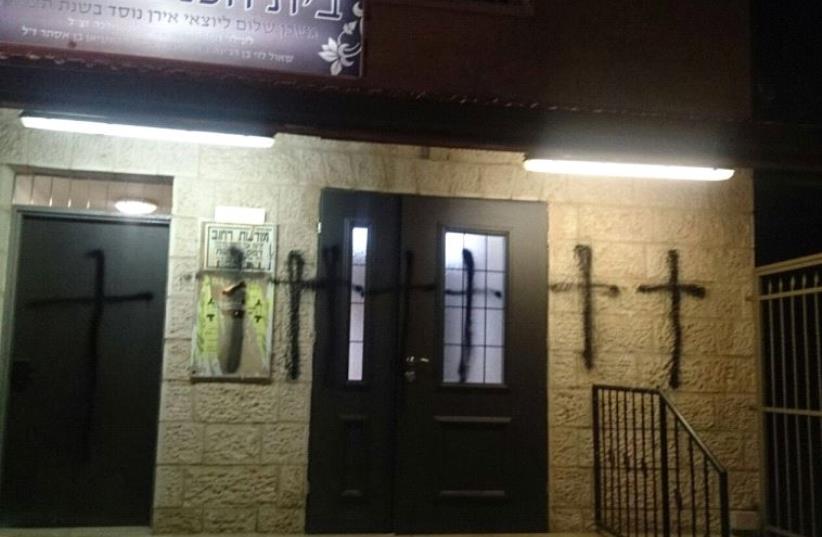 A Jerusalem synagogue defaced with graffiti.
(photo credit: POLICE SPOKESPERSON'S UNIT)
Advertisement
Christian crosses were spray-painted in black across the front doors and windows of a Jerusalem synagogue overnight Sunday in the neighborhood of San Simon. Jerusalem police have opened an investigation into the incident and are searching for suspects.  Recently, Jewish communities have been on high alert following a wave of terror attacks. The event comes just days after a suspect vehicle with gas cylinders was found outside a Jewish community center in the southern city of Marseille.The parked car found Saturday morning outside the Bar Yohaye Jewish Community Center and synagogue in Marseille’s 4th Arrondissement east of the Saint-Charles railways station had no trigger mechanism to cause an explosion and was not stolen, Laurent Nuñez, the police commissioner of the Bouches-du-Rhône region, told La Provence.There was no indication that the car found in Marseille was connected in any way to what police believe was a foiled attempt to carry out a terrorist attack in Paris last week involving a car with several gas cylinders that was found abandoned near Paris’s Notre Dame cathedral, Nuñez added.JTA contributed to this article.