Dozens of Jerusalemites answered the requests of a woman who lost her engagement ring to help her search through a vast pile of garbage. 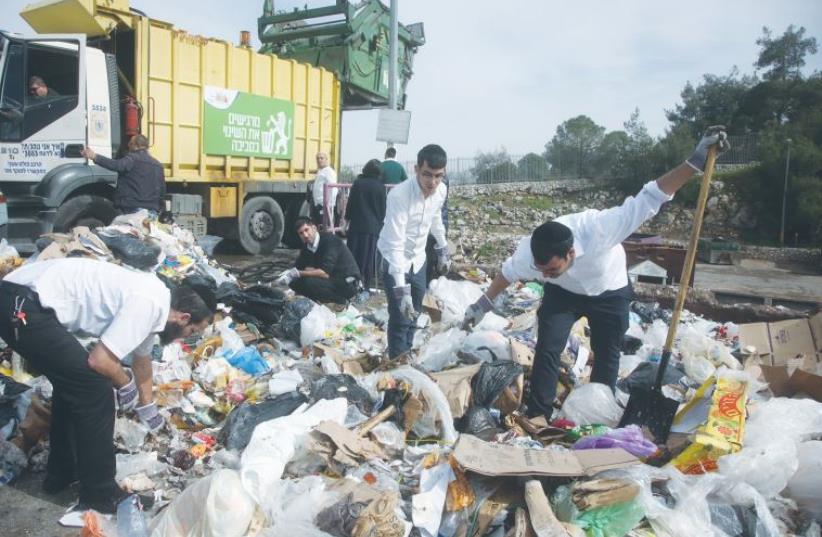 VOLUNTEERS WADE through mounds of garbage in the capital yesterday, hoping to help a bride find her engagement ring and receive the $1,000 award
(photo credit: MARC ISRAEL SELLEM)
Advertisement
Dozens of Jerusalemites answered the requests of a woman who lost her engagement ring to help her search through a vast pile of garbage on Thursday in which she had accidentally lost the valuable piece of jewelry.A young woman in Jerusalem’s ultra-Orthodox Geula neighborhood who is set to get married in a months time was emptying her trash into a receptacle on the street and placed her diamond engagement ring in her pocket for safekeeping while doing the errand.There was however a small, empty food bag in her pocket which she also discarded, and the ring seemingly fell into the bag before she threw it into the dumpster.Having completed the task, she searched for the ring in her pocket and failed to find it. Just moments after she had disposed of her garbage however, a garbage truck approached the dumpster and emptied it into the truck seemingly with the ring inside.The woman realized what had happened several moments later and immediately alerted the driver to the problem.After a search on the street failed to locate the ring, the truck – with the approval of the municipal authorities – was taken to a city warehouse and emptied to enable the family to search for the ring, worth close to NIS 40,000.The family then sent out a notice asking members of the public to help them with their search.Several dozen people responded to the request and waded through the mounds of garbage to help the family in the malodorous, unpleasant and nigh on impossible task of trying to locate a diamond ring in a rubbish mountain.The family offered a $1,000 financial reward to anyone who could find it; unfortunately, they were forced to call off the search when darkness fell.According to a publicist who was in contact with the family and who coordinated the volunteer effort, the story had a happy ending but the family would not allow details of what happened to be given to the press.