Lau said that it was “forbidden” to deliberately speak to the Conservative community in such a manner, and that education in Conservative schools “distances Jews” from their tradition. 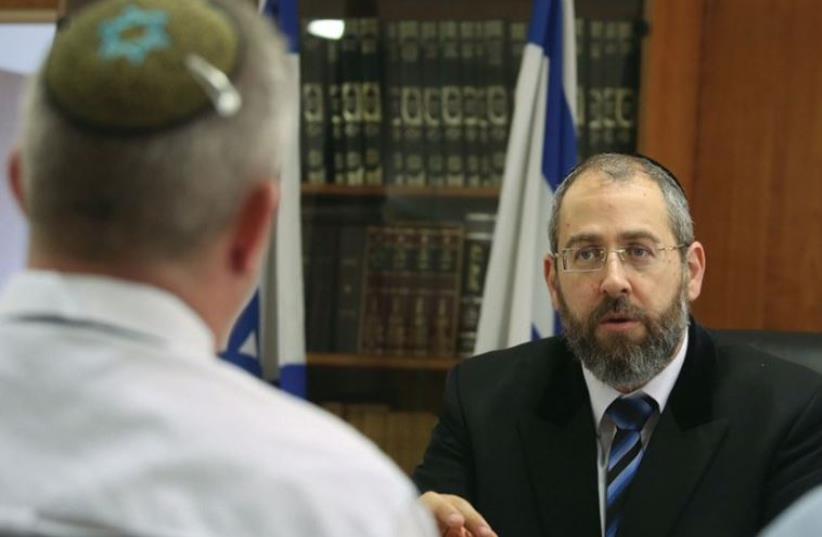 Ashkenazi Chief Rabbi David Lau speaks to The Jerusalem Post
(photo credit: MARC ISRAEL SELLEM/THE JERUSALEM POST)
Advertisement
President and CEO of the Jewish Federations of North America Jerry Silverman has weighed into the controversy surrounding comments made by Chief Rabbi David Lau on Wednesday criticizing Education Minister Naftali Bennett for visiting a Conservative school earlier this month. Lau said that it was “forbidden” to deliberately speak to the Conservative community in such a manner, that education in Conservative schools “distances Jews” from their tradition, that the movement was “losing its children and grandchildren,” and that he would have forbidden Bennett, who also serves as Diaspora Affairs Minister, from making the visit had Bennett asked him. Silverman welcomed Bennett’s visit and his engagement with the non-Orthodox Jewish denominations and said that he should be praised not criticised for it. "Israel's Chief Ashkenazi Rabbi David Lau was wrong to criticize Minister Naftali Bennett for the minister's visit to a Solomon Schechter community day school in Manhattan,” said Silverman.“As the minister who covers both the education and Diaspora portfolios, Mr. Bennett serves a unique role in representing the Israeli government and must continue to reach out to all Jews wherever they are -- including at religious schools, day schools and camps affiliated with all of the streams of Judaism,” he continued.  “By connecting and learning about Jewish educational experiences in the Diaspora, Mr. Bennett is doing exactly what is appropriate. There should not be suggestions that the Minister of Diaspora Affairs needs to ask for permission to experience Jewish education moments while traveling. In fact, Mr. Bennett should be recognized for his leadership with these efforts, not criticized.”