Although the fire did not cause serious damage, the crime rattled the church and drew swift condemnation from Israeli politicians and religious leaders from around the world. 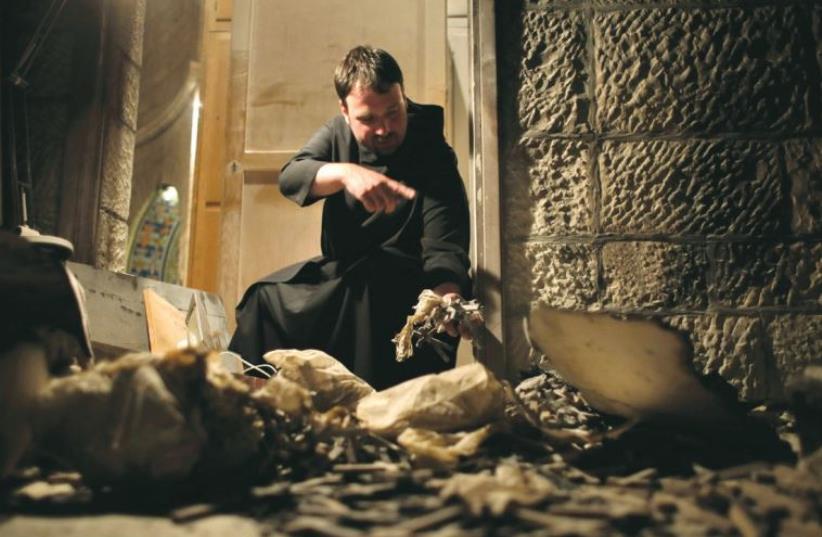 A PRIEST points to damage at the Dormition Abbey on Mount Zion after an arson attack on May 26, 2015
(photo credit: REUTERS)
Advertisement
Mordechai Meyer, an 18-yearold Jewish extremist from Ma’aleh Adumim, was released from administrative detention and placed on house arrest after being in Shin Bet (Israel Security Agency) custody for five months for his purported role in a Jerusalem church arson in February.Meyer, who was arrested in August, was accused of setting a bathroom and corridor on fire and spraying anti-Christian graffiti on the walls of the Dormition Abbey compound of the Orthodox Church of Jerusalem, opposite the Old City’s Zion Gate.He was released on Sunday after two unidentified minors confessed to the crime, while a third suspect was indicted.Although few details of the investigation into the arson were made public due to a court-issued gag order, during an interview with Army Radio shortly after the hate crime, Greek Orthodox Archbishop Aristarchos said two suspects were spotted in the compound.“Two people who were hiding their faces came from the east side of the structure near the cemetery and the Catholic church,” he said at the time. “From there they threw flammable liquid at the seminary’s bathroom.”Aristarchos added that, on at least one occasion, ultra-Orthodox Jews had threatened members of the seminary.“Once religious Jewish people with sidelocks came and issued threats,” he said. “Perhaps the police will know if this is connected to them.”Although the fire did not cause serious damage, the crime rattled the church and drew swift condemnation from Israeli politicians and religious leaders from around the world.President Reuvin Rivlin called Patriarch Theophilos III of Jerusalem to express his outrage and shock, and to assure him that the perpetrators would be brought to justice.“It is inconceivable that an act like this could happen in a house of prayer,” Rivlin said at the time.“This is a heinous crime; there must be an investigation and those responsible must be brought to justice. Such criminals not only threaten to set fire to places of worship holy to all of us, but ignite the regional powder keg upon which we all sit.”The president added that protecting the holy sites for all religions is imperative to maintain the sanctity of Jerusalem.“We all have a responsibility to put an end to these terrible acts,” Rivlin said.During the call, Theophilos thanked Rivlin for his reassurance, and spoke of the importance of tolerance. “Our mission is to act to bring an end to such acts, in all areas of the Land of Israel,” he said.Rabbi Yechiel Eckstein, head of the International Fellowship of Christians and Jews, also denounced the attack, calling on Christians and Jews to unite to fight religious persecution.Meanwhile, the PA Foreign Ministry claimed that the arson was part of an “onslaught against mosques and Islamic and Christian holy sites.”Meyer was placed under administrative detention by the Shin Bet without being charged shortly after Jewish terrorists murdered a Palestinian toddler and his parents in a firebombing in the West Bank village of Duma.Although the Shin Bet said that Meyer was not a suspect in the Duma firebombing, it claimed that it had information linking him to the church arson. However, two minors suspected in the Duma attack recently claimed responsibility for the arson and graffiti.One of the unidentified minors was indicted for both attacks, while the other minor and another suspect were charged with the church arson.Although Meyer was released, he remains under house arrest and is forbidden from entering the West Bank.Despite claims of false imprisonment from Meyer’s lawyer, coupled by demands that he be released from house arrest, the Shin Bet issued a statement alleging that although Meyer did not desecrate the church, he nonetheless “belongs to a Jewish terrorist organization.”“The basis of his administrative detention was the immediate risk he posed as a member of this organization, and as someone who was involved in its activities,” the Shin Bet said of the unspecified group.