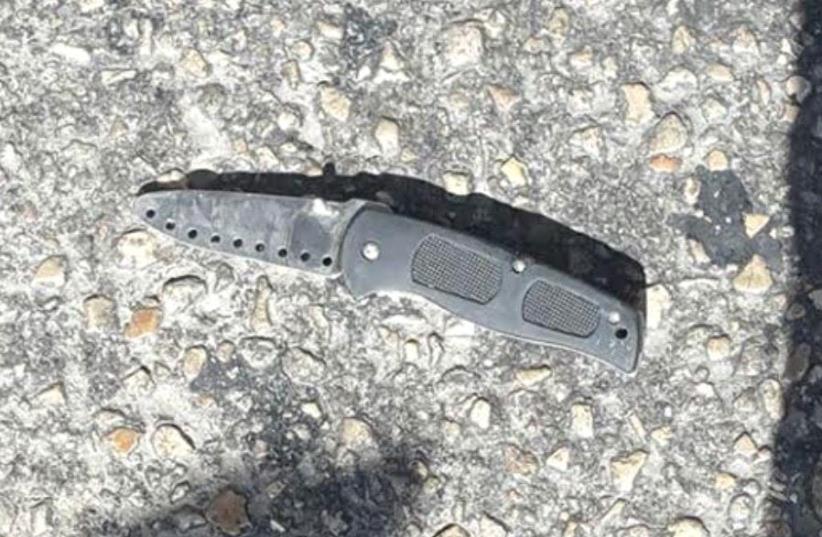 The knife allegedly used in the attempted stabbing at the Hizma checkpoint, north of Jerusalem
(photo credit: POLICE SPOKESPERSON'S UNIT)
Advertisement
A 19-year-old Jewish male from the east Jerusalem neighborhood of Pisgat Ze’ev was shot and killed at Hizma checkpoint, north of the capital, by Border Police Wednesday afternoon after allegedly brandishing a knife and attempting to stab an officer.
Jewish teen killed after attempting to stab officer at Jerusalem checkpoint (credit : REUTERS)
According to Police spokesman Micky Rosenfeld, the attempted attack took place at approximately 3:30 p.m.“The suspect arrived at the checkpoint with a silver knife in his hand and approached the officers and then attempted to stab one of them,” said Rosenfeld, noting that the officer was not harmed. “They responded by opening fire on the suspect, who was critically wounded.“What we know right now is that the suspect is from Jerusalem and that he was heading to the Hizma area towards Judea and Samaria.”Rosenfeld said the unidentified suspect did not speak during the thwarted attack.It was reported that the 19-year-old left a suicide note, expressing frustration with his drug addiction.