Following the massacre, Army Radio reported that no Israelis were harmed in the tragedy. They added, however, that five members of the Jewish community in Nice had been injured in the attack. 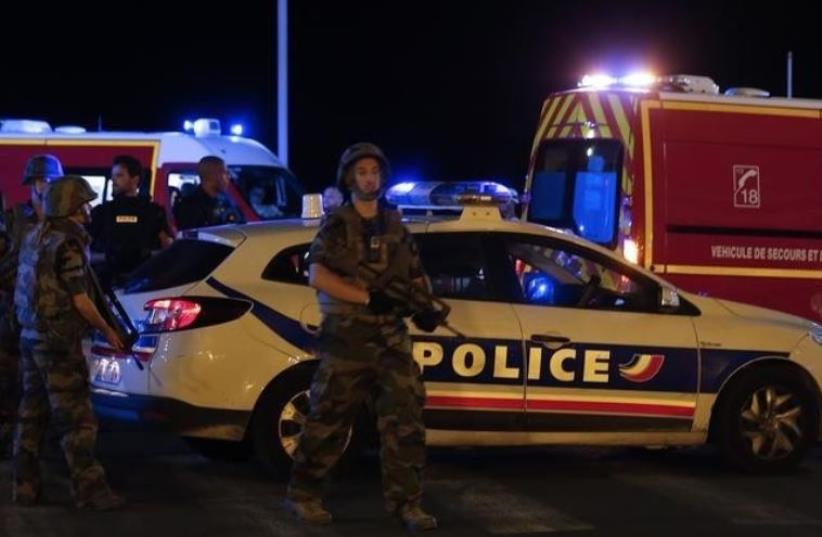 French soldiers and rescue forces are seen at the scene whare at least 30 people were killed in Nice, France, when a truck ran into a crowd celebrating the Bastille Day national holiday July 14, 2016.
(photo credit: REUTERS/ERIC GAILLARD)
Advertisement
Still shocked and horrified by the senseless carnage that took place in Nice, France late Thursday evening, the Jewish world conveyed its deepest sympathies to victims of the deadly Bastille Day terror attack.Over 80 people were killed and scores injured after a 31-year-old Franco-Tunisian gunman rammed a truck into a of crowd of spectators out enjoying a fireworks display.Following the massacre, Army Radio reported that no Israelis were harmed in the tragedy. They added, however, that five members of the Jewish community in Nice had been injured in the attack.It remains unclear the present condition of the Jewish victims.The attacker was reportedly named as Mohamed Lahouaiej Bouhlel, according to British daily The Daily Mail, but the information has yet to be confirmed. According to authorities, the suspected assailant was not on the watch list of French intelligence services, but was known to police in connection with common law crimes such as theft and violence.With hearts still heavy and rattled by Thursday night's appalling event, France was greeted with an outpouring of compassion from the Jewish community while offering their support in solidarity."Israel condemns in the strongest terms last night's horrific attack in Nice. We are again reminded that terrorism can strike anywhere and must be fought everywhere," Prime Minister Benjamin Netanyahu said in a strongly worded statement hours after the attack.He added that "Israelis stand united with the people of France today. We join you in mourning those who were killed and wish a speedy recovery to the wounded. Israel is ready to help the French government fight this evil until it is defeated."Absorption Minister Sofa Landver expressed her deepest condolences to the victims and said she will be opening her office to help French Jews in need, specifically those looking to immigrate to the Jewish state."Sunday my office will conduct an emergency meeting with the Jewish Agency where we will discuss ways to help French Jews who want to make aliya," her office said in a statement. She added that the ministry will approve a special plan for families willing to move to the Negev or the Galilee areas.French Ambassador to Israel, Patrick Maisonnave, thanked the Israeli government and its citizens for supporting his nation at such a difficult time, and said that his country would once again persevere in the face of such adversity.
"On our national holiday, Bastille Day, France once again finds itself standing in the face of a horrific terror attack. Dozens killed and injured, men, women, children, all victims of terrorism in Nice.""We are obviously grief-stricken, and I am confidant that all of our friends in Israel stand united with us and in solidarity with the French people and share in the grief of the victims' families and love ones,"
Maisonnave added: "What kind of world is this where a fanatic can kill following a day of joy... a day of celebration honoring the nation of France? France will cope once again in the face of these events."
Rabbi Yosef Pinson, the Chabad emisary in Nice, said "the Jewish community has decided not to surrender to terrorism and will continue living our daily Jewish lives. We will conduct our Shabbat shopping in the kosher stores and attend services at our synagogues."Meanwhile, President Reuven Rivlin personally sent a letter of condolence to French President Francois Hollande Friday morning on behalf of the citizens of Israel. "It is with pain and sorrow that I must once again write and express my deepest condolences, and those of all the Israeli people, following the horrific terror attack in Nice," Rivlin wrote to the French president."Israel stands with France and the Israeli people stand with the French people, shoulder to shoulder in the face of this terrible evil, as should the whole free world. We must work united to reach the terrorists, their supporters and backers, wherever they may hide," he added.Opposition leader in the Knesset MK Issac Herzog (Zionist Union) also posted to social media his thoughts on Thursday evening's terror attack."The vile terrorism has returned in full force and destroyed the celebration of freedom, equality and fraternity," Herzog wrote on his Twitter page Friday."This is our generations world war. My condolences to the French nation and the families of the killed and wounded," he added. Outpouring of support from Israeli leaders continued with former president Shimon Peres saying "we embrace the French people who are suffering from this tragic terror attack."He added that "world leaders must come together and fight global terrorism." News outlets were still waiting to receive information pertaining to the perpetrator's identity from counter-terrorist investigators, who a local government official said opened fire after exiting his vehicle before police shot him dead. The official said weapons and grenades were found inside the 25-tonne, unmarked articulated truck.Officials said hundreds were hurt as the driver wove along the seafront, knocking them down "like skittles."The attack, which came eight months and a day after Islamic State gunmen and suicide bombers struck the French capital on a festive Friday evening, seemed so far to be the work of a lone assailant.Reuters contributed to this article.