Tibi to ‘Post’: This is a basic right of the Israeli Arab public. 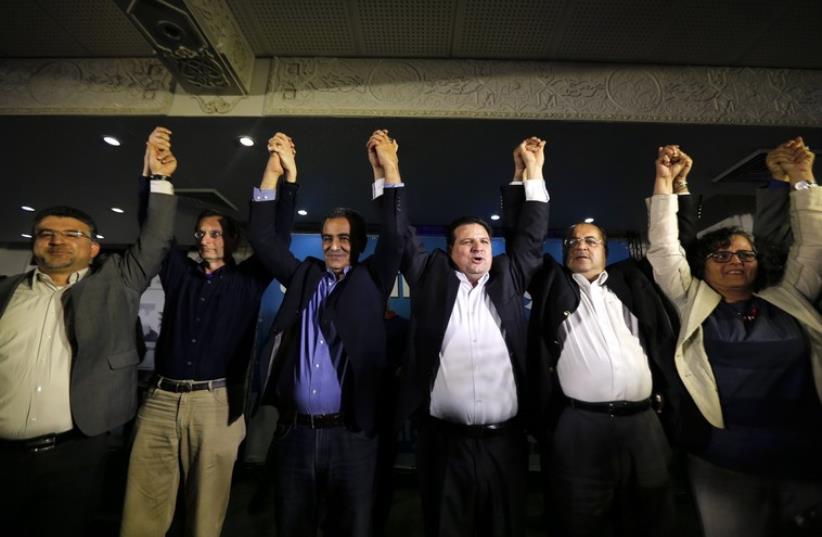 Ayman Odeh (3rd R), head of the Joint Arab List, reacts with members of the party after exit poll results in Nazareth March 17
(photo credit: REUTERS)
Advertisement
The Joint List has proposed Knesset bills to create a new Arab city in the North and an Arab university, and remove bureaucratic difficulties for Arab citizens wishing to visit Arab countries.These bills and others by the Joint List are meant to promote equality, according to the website of the Israeli Communist party – Maki, which is part of the Hadash party.The legislation to establish an Arab institute of higher learning within an Arab community, submitted by Ta’al MKs Ahmad Tibi and Osama Sa’adi and Hadash MKs, argues that as Arabs must undergo instruction via the Hebrew language and they encounter difficulties with this, many go abroad for their studies.For example, many of them attend universities in Jordan and in the Palestinian territories.Asked about the likelihood of the university bill becoming law, Ta’al chairman Tibi told The Jerusalem Post that he does not believe that this government will allow it, but that “we will continue to advance the idea because this is a basic right of the Israeli-Arab public.”Another proposal by Tibi and Sa’adi seeks to create a new Arab city, unrelated to the proposal for a new city that has been on the agenda to be built near Acre, Tibi said. Tibi added that he first proposed a new Arab town in the early 1990s.Either way, it would be the first non-Beduin Arab city to be erected in Israel since its establishment.Another law proposal, according to the Maki website, calls for establishing goals for the Arab educational system such as the “deepening of the Arab Palestinian national identity which is proud in its cultural achievements and sustain contact” with the Arab and Islamic world.This identity would be based on “the cohesion of the Palestinian people and the strengthening of the memory and Palestinian narrative.”MK Yousef Jabareen (Hadash) is drafting a bill that would establish an independent Arab education system modeled on the Jewish state religious one. This system would teach the Israeli- Palestinian conflict from the Palestinian perspective and include subjects such as “the Nakba and contemporary culture.”