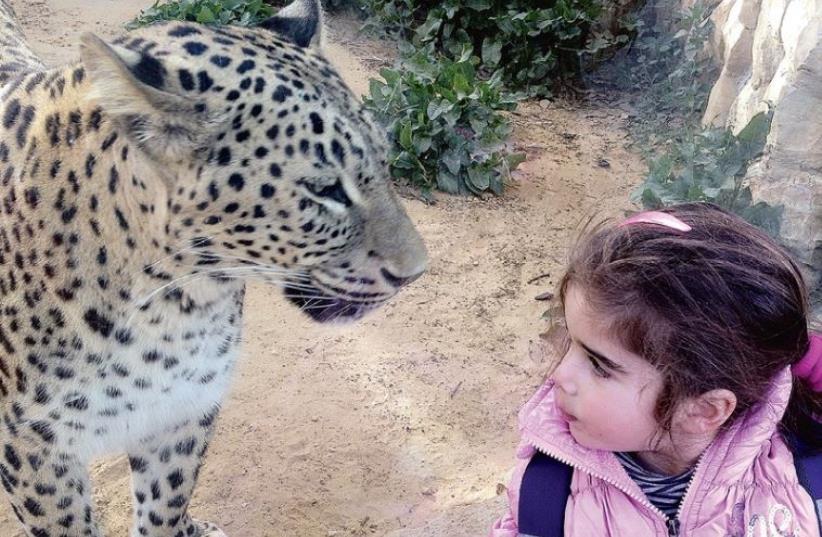 Gazing into the eyes of a jungle cat at the Jerusalem Biblical Zoo
(photo credit: DVORA TANZI MALUL)
Advertisement
Citing potential animal endangerment and cruelty, a Jerusalem Magistrate’s Court Judge has blocked the planned construction of a new neighborhood adjacent to the capital’s Biblical Zoo.The ruling was made Thursday and followed a review of an appeal submitted by an animal-rights group and concerned residents from the southwest neighborhood of Givat Massua, who contended that the proposed community, to be named Morodot Massua, would irreversibly harm the animals.The animal-rights group, Let the Animals Live, cited loud noise and copious amounts of dust as being potentially life-threatening to the more than 2,200 animals, representing 271 species.According to attorney Yossi Wolfson, who represented Let the Animals Live and the concerned residents in the petition to cease construction, the ruling represents a “victory for the vulnerable, whose freedom was discounted over real estate interests.“The animals do not need to be exposed to the tortures of living next to a huge construction site without any possibility of escape,” Wolfson told Haaretz. “The right to a life of minimal suffering, even for animals, is more important than real estate gains.”Judge Arnon Darel dismissed the testimony by the director of London’s Zoological Society, who claimed that certain measures, including planting trees around the zoo’s perimeter, could be taken to minimize harm to the animals.Darel ordered that alternative plans for the community be submitted to the Jerusalem Municipality.