Smartphones should now cost hundreds of shekels less while competition between importers and retailers will intensify. 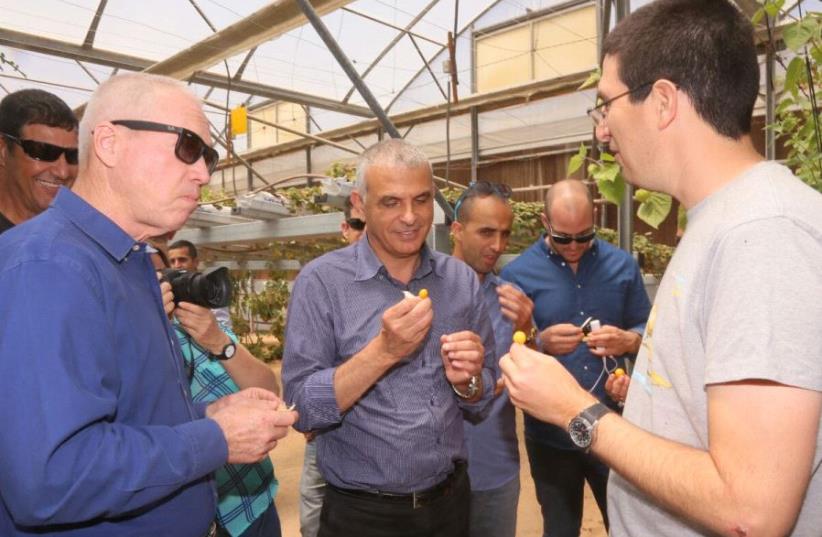 Kulanu Ministers Moshe Kahlon and Yoav Galant touring agricultural hothouses in Sapir, a moshav in the Arava.
(photo credit: KULANU)
Advertisement
Cellphones will now cost hundreds of shekels less.Finance Minister Moshe Kahlon on Thursday signed an order canceling the import tax on mobile telephones, as part of his “Net Family” tax cut plan that he unveiled two days earlier.According to the old regulation, importers had to pay a purchase tax of 15% on the import of mobile phones and smartphones as well as 17% VAT.The cellphone companies cut prices for handsets already on Thursday, ahead of the tax reduction.Smartphones should now cost hundreds of shekels less while competition between importers and retailers will intensify. Based on the cancellation of the 15% import tariff, the cheapest iPhone 7 model in the iDigital chain, which currently costs NIS 3,749, should cost NIS 2,868.Samsung’s Galaxy S7, which currently costs NIS 2,799, should be reduced to NIS 2,141.Kahlon’s program also includes benefits such as subsidies for after-school activities, extra tax points for men and women with children up to six years old, expansion of work grants, and reduced taxes on baby clothes and on shoes for people of all ages.The program, according to the Finance Ministry, will raise net household salaries by tens of thousands of shekels each year.The finance minister instructed the Tax Authority on Thursday to expedite the legislation that would cancel the 6% import tax on clothes for babies and the 12% tax on shoes. As part of a legal requirement to advance the legislation, the public was invited to respond to the plan in emails to the Tax Authority.“It is important for Israeli workers to know that we know how to give and not just to take,” Kahlon said.“The Israeli economy is strong, thanks to the strong people behind it who work and pay taxes. We took another step to strengthen them and their families with action, not just words.”On a tour of the Arava region with Construction Minister Yoav Galant from his Kulanu party, Kahlon announced that 120 housing units would be built for young families off Route 90.“We have an obligation to build and help working families all over the country,” Kahlon said. “The Arava region requires new energy from the government and we are providing it today.”