Kerry says US, Israel can still achieve progress towards 2-states in coming months

There is concern and speculation in Jerusalem that US President Barack Obama may refrain from rejecting a UN Security Council resolution recognizing a Palestinian state before the end of his term. 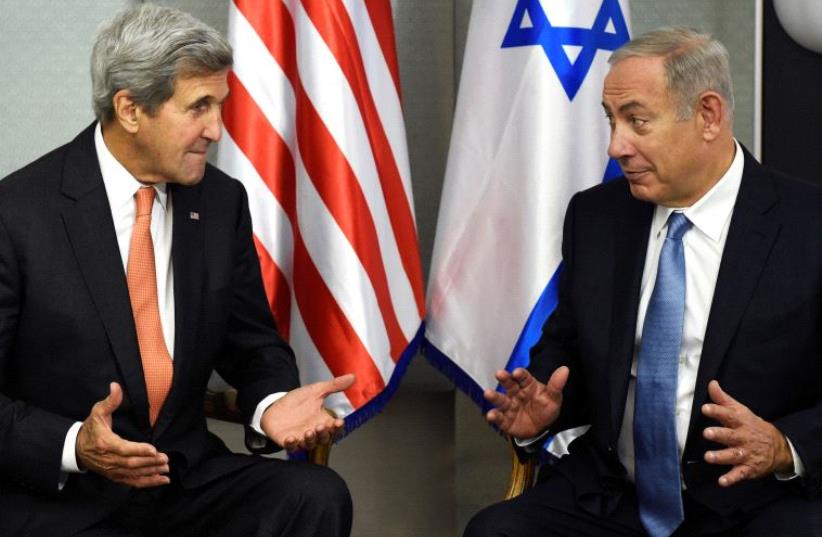 PM Benjamin Netanyahu and US Secretary of State John Kerry
(photo credit: REUTERS)
Advertisement
US Secretary of State John Kerry said Friday that the US and Israel can still accomplish a number of "things" before the end of the Obama administration, while stating the need to "protect the two-state solution" during remarks before a meeting with Prime Minster Benjamin Netanyahu."There are things we believe we could achieve in the next months, and there are serious concerns that we all have about the security of the region, the need for stability, the need to protect the two-state solution," Kerry said in a brief statement."[O]ur hope is obviously that we can find a way to utilize the friendship of our countries to advance, what we believe is not only in the highest priority for Israel to provide for its long-term security, but also to create a new relationship within the region that can be powerful in reinforcing that long-term security interest," added Kerry. Netanyahu met with the US's top diplomat in New York following the premier's speech before the United Nations' annual General Assembly debate, where the two also discussed security matters concerning the Middle East and the newly signed Memorandum of Understanding which aids Israel an estimated $38 billion dollars over the next 10 years. "John, Secretary of State Kerry, friend, it’s good to see you again," Netanyahu said in opening remarks before their discussion. "I look forward to continuing our conversation, which I have to divulge we do every other day by phone, sometimes every day." "But it’s always important and productive" the premier continued, "to talk directly about how we can advance peace and stability with our neighbors in the region, and that’s something I look forward to doing with you now." The meeting comes amidst fears in Jerusalem that US President Barack Obama may refrain from rejecting an international initiative at the UN seeking to recognize Palestinian statehood in the last months of his administration.American politicians have mirrored this concern, with 88 US senators earlier this week submitting a bipartisan letter calling for the White House  to uphold US policy that calls for a veto of any one-sided United Nations Security Council resolutions regarding the Israeli-Palestinian conflict, according to a press release of the American Israel Public Affairs Committee (AIPAC).The letter, initiated by Senators Kristen Gillibrant (D-NY) and Mike Rounds (R-SD) quotes Obama's speech to the General Assembly in 2011, in which he said, "Peace will not come through statements and resolutions at the United Nations."