The indictment details how the defendant, 32-year-old Shlomo Pinto, stalked a local Kiryat Atta shopping center with a kitchen knife and a box-cutter looking for an Arab to kill. 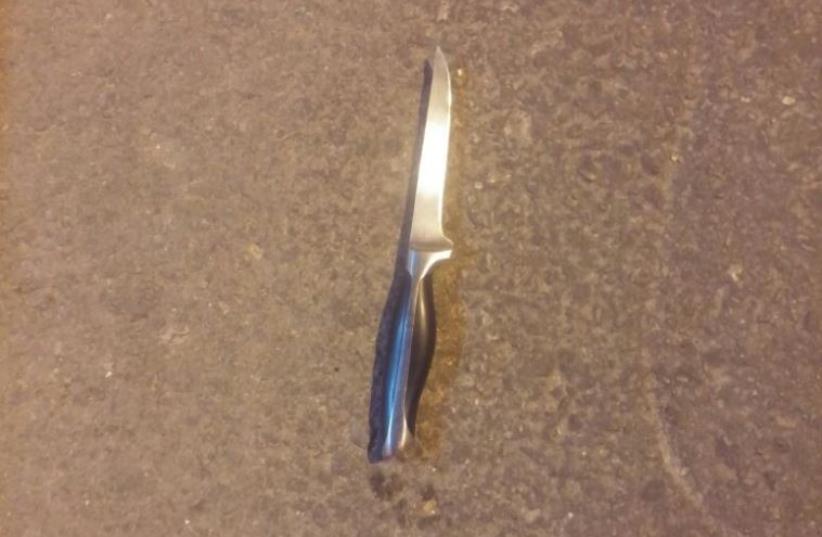 Knife from the scene of a possible stabbing attack thwarted in northern Jerusalem, July 9, 2015
(photo credit: POLICE SPOKESPERSON'S UNIT)
Advertisement
A man from the Haifa suburb of Kiryat Ata was indicted on Sunday for attempted murder and possession of a knife for a hate crime.“Because of the terrorist incidents that swept the country in the first half of October, the defendant decided to carry out a revenge attack against someone of Arab origin, and to also inspire others to carry out similar attacks,” the indictment reads.Shlomo Pinto, 32, walked through a Kiryat Ata shopping center with a kitchen knife and a box-cutter looking for an Arab to kill, the indictment says. On the morning of October 13, Pinto left his home at 11 a.m. carrying a kitchen knife, a box-cutter and a hammer, and made his way to Zvulun Street in the center of the town “in order to find an Arab and kill him.”Prosecutors described in the indictment how Pinto – with one blade tucked in his sleeve and another in his jeans pocket – began following a man who he saw on the street he thought could be Arab. Pinto then followed the man as he walked to a bank, and waited outside for the man to exit the bank. After the man failed to emerge from the bank, Pinto decided to try a nearby branch of the Shufersal Deal supermarket chain “because he thought that they employ Arabs and there he could carry out his plan.”Walking through the aisles, Pinto saw an employee stocking shelves in the frozen food section whom he was convinced was an Arab. Pinto then attacked Uriel Rizkin, stabbing him in the hip and lower back and shoulder areas, with the intent to kill, the indictment says. Rizkin began to run for his life down the aisle, as Pinto gave chase with the knife raised above his head. Rizkin grabbed a shopping cart and used it to block Pinto, who fled the scene.Rizkin – a local Jewish man – suffered a pneumothorax (a collapse) in his left lung, contusions to both lungs, a broken rib, air bubbles in his back muscles, an injury to his sternum, internal bleeding in his pelvic area, and lacerations to his back and one of his kidneys.Pinto’s attorney, Yossi Gimple, said his client, a father of three, “is a normative man from a normative family who was in emotional turmoil on that day.”Gimple said he still hadn’t managed to determine what caused Pinto to carry out the attack, but that “it’s probably because of the [security] situation and the events that took place in recent days. This includes on the day it happened, which was one of the worst days with terrorist attacks in Ra’anana and Jerusalem and people who got killed the same day.”Gimple added that his client had no intention to kill and should be taken for psychiatric testing to check his emotional and mental state.After the attack, Rizkin spoke to the press from his hospital bed, seemingly unable to make sense of the attack. He said that if Pinto had instead attacked one of his Arab co-workers, he would have come to the victim’s assistance.“There’s no difference if he stabbed me or one of the Arabs I work with. If he would have stabbed one of the Arabs, I would have gone and hit him [Pinto].It doesn’t matter who stabs who and why. People come to work, to work together; they don’t bring politics into it,” Rizkin said.