Lapid aims to save Israel's Declaration of Independence

Yesh Atid leader Yair Lapid wrote on Facebook that the aim of the bill is to create a department within the state archives whose role will be to locate historical documents and artifacts. 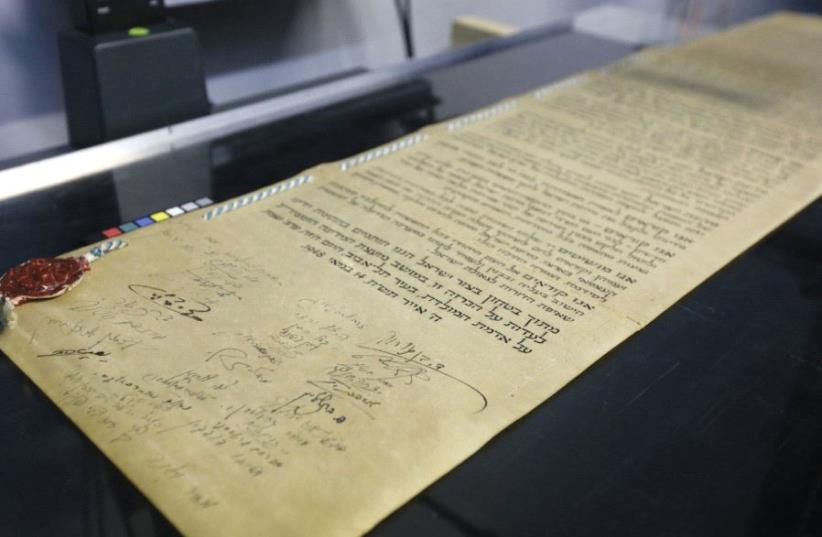 Israel's Declaration of Independence
(photo credit: MARC ISRAEL SELLEM)
Advertisement
Yesh Atid leader Yair Lapid began an effort Sunday to ensure that the most important documents in Israel’s history will be protected.Lapid submitted what he called the “Declaration of Independence Bill” to the Knesset. He wrote on Facebook that the aim of the bill is to create a department within the state archives whose role will be to locate historical documents and artifacts which are currently in private hands, purchase them, and preserve them in the national archives.“How would it look if a draft of Israel’s Declaration of Independence will be up for auction to the highest bidder?” Lapid asked. “Is that how a country should treat its historical treasures? We have to ensure that our moral, historical and national treasures will be in the hands of the state. Documents like the draft of the Declaration of Independence will be preserved and protected for every citizen.”The head of the national archives has already expressed support for the idea.Lapid’s bill will come to a vote after the Knesset returns from its extended summer recess on October 23.“A nation that doesn’t respect its past will have a barren present and a future shrouded in uncertainty,” he said.Lapid submitted another bill, together with Yesh Atid MK Mickey Levy on Sunday that would improve the state benefits given to policemen, raising them to the level of IDF officers. Levy, a former Jerusalem police chief, said Prime Minister Benjamin Netanyahu and his ministers had “spat in the face of the police by voting against equalizing the benefits in the past.”“Those who serve in the police and the Prisons Service have been on the front lines of the war on terror,” Lapid said. “The state must treat them like warriors defending Israel should be treated.”