Lapid hosted as part of his personal initiative to strengthen both Israel's foreign relations and Holocaust remembrance. 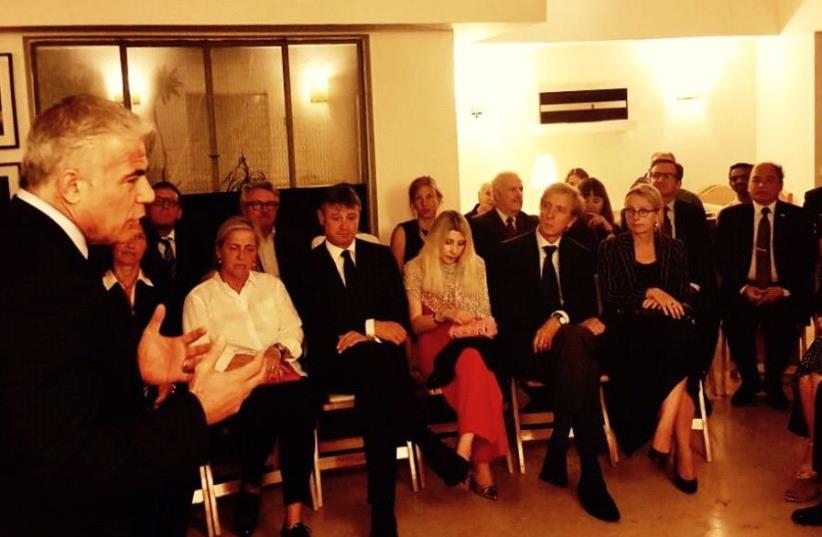 Yair Lapid hosts diplomats in his home for Holocaust Remembrace Day.
(photo credit: YESH ATID)
Advertisement
Yesh Atid leader Yair Lapid and his wife Lihi Lapid hosted 30 Ambassadors and charge d'affaires in their Tel Aviv home Saturday night for a moving event in which he told the story of his father, the late Justice Minister Yosef (Tommy) Lapid, who was a child survivor of the Holocaust.The event was held within the framework of Zikaron BaSalon, a seven-year-old initiative that encourages survivors and their family members to tell their stories in intimate gatherings in their homes. It was the first time an event like this had been done specifically for members of the diplomatic corps.Lapid hosted as part of his personal initiative to strengthen both Israel's foreign relations and Holocaust remembrance. Embassies represented including France, Germany, Italy, Canada, India, Brazil, Myanmar, Portugal, Poland, Hungary, Austria, Greece, Switzerland, Latvia, Lithuania, Slovenia, Slovakia, Netherlands, Sweden, Norway, Denmark, and the Czech Republic. After telling his father's story of survival, Lapid ended by quoting from the final speech Yosef Lapid delivered as chairman of Yad Vashem.
Israel marks Holocaust Memorial Day 2016
“Six Million dead speak to us from the beneath the ground. 'We thought,' they say, 'that it can’t happen. We relied on the goodwill of others. We believed there was a limit to the madness. When we woke from our delusions it was already too late. Don’t follow in our footsteps.' The enlightened world advises us to make compromises and take risks for the chance of peace. And we ask the enlightened world, On Holocaust Remembrance Day, we ask all those who preach morality to us: And what will you do if we take risks and sacrifice and put our trust in you and something goes wrong? What will you do then? Will you apologize? Will you say ‘we were wrong’? Will you send bandages? Will you open orphanages for the children who survive? Will you pray for our souls?'”After Lapid spoke, there was a discussion during which ambassadors shared stories and experiences and reflected on the responsibility of the world to keep the memory of the Holocaust alive and learn its lessons. The German Ambassador said during the discussion, "The question we as Germans have to ask ourselves, and maybe some of other countries represented here as well, is how a cultured, civil society with a well-functioning government could turn into a murderous machine? We don't have an answer, but we do know that people tend to believe that rationality will always win out over evil in the end, but part our role is to remind people that isn't always the case."Hungarian ambassador Andor Nagy told The Jerusalem Post that the best way to ensure the Holocaust is properly remembered is to invite people to meet survivors and their families. He noted that Hungary has more than 500 teachers who have been educated in Jerusalem by Yad Vashem. "It was very moving, very touching, and very personal, because of the story of Lapid's father, who is from Hungary," Nagy said. "He opened the heart of the ambassadors, which is very important. It is crucial to educate the children who don't have a personal connection to the Holocaust. Many of us ambassadors come from countries like mine who were unfortunately involved in the Holocaust, but some are not. Ambassadors represent different countries with different histories." Zikaron BaSalon founder Adi Altschuler, who attended the event, said she was glad Lapid hosted a gathering for such an important audience. "When non-Jewish ambassadors come from so many key countries and take part in an intimate, informal evening that enables deep questions about the role of the international community in remembering the Holocaust, it has a huge impact," Altschuler said. "We see what is happening in the world now. The people who attended become not only ambassadors but emissaries to the world of the story they heard."