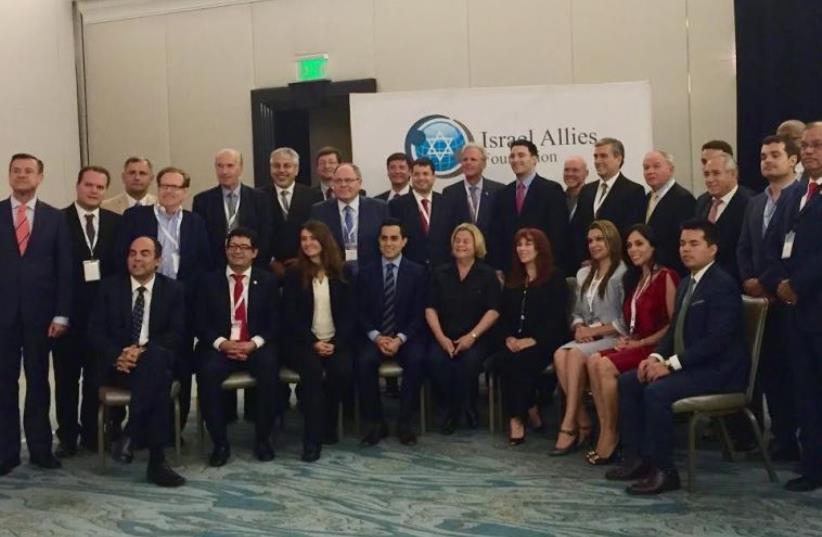 Latin American MPs sign resolution supporting Israel and opposing boycotts
(photo credit: ISRAEL ALLIES FOUNDATION)
Advertisement
Lawmakers from 13 Latin American and Caribbean countries signed a resolution affirming their support of Israel and calling to fight boycotts, a document obtained by The Jerusalem Post Thursday confirmed.The parliamentarians met at the Israel Allies Foundation’s Second Annual Latin America Summit on Israel, which took place in Miami last week.Among the politicians attending were MK Michael Oren (Kulanu), US Congressmen Ed Royce (R-California), and Eliot Engel (D-New York), chairman and ranking member of the House Foreign Affairs Committee.The IAF, founded by former minister Rabbi Binyamin Elon, works with parliaments around the world to mobilize political support for Israel based on Judeo-Christian values.The resolution the Latin American lawmakers signed states, in Spanish, that they “unequivocally declare, personally, our support for the Jewish people to live in peace, safety and security in the Land of Israel,” and that “strong relations between the Western Hemisphere and Israel are crucial to the spread of freedom, democracy and justice around the world.”As such, the legislators encouraged their governments to increase efforts to strengthen ties with Israel.“Boycotts and sanctions against the State of Israel and its products contribute to an anti-Semitic attitude inspired by anti-Semitism and opposition to the Jewish State... [and] are detrimental to a peaceful resolution of the Arab-Israeli conflict, and must be rejected by all actors that seek peace,” the resolution reads.It also states that “the eventual existence of countries with nuclear weapons in the Middle East poses an existential threat to Israel and for peace around the world.”Oren, the keynote speaker at the event, said Israel should relate to Latin American countries as it does with superpowers, in order to realize the “full potential and diplomatic and economic opportunities [these countries] present.”“South America is a huge continent with economic and diplomatic influence,” he stated.Congressman Julio Borges, the head of the political opposition in the Venezuelan National Assembly, said that it is unfortunate that in the last decade his country’s support for Israel has declined.“It’s critical we reverse the trend and strengthen our relationship,” he said.Minister Ruperto Long of Uruguay, a longtime advocate for strong Israel-Latin American relations, pointed out that his country was the first in Latin America to have an Israeli embassy.“Jewish people have played a very important role in Uruguay for more than a century, and we need to honor that tradition. It is unbelievable that after more than 3,000 years the Jewish people have not been allowed to have their own country where they can live in peace. For me, this is an essential human rights issue to fix,” he said.IAF executive director E.J. Kimball said the attendees were enthusiastic about strengthening their countries’ ties with Israel.“We’re impressed with the seniority of parliamentarians that attended our 2016 Summit and the level of discussions we had,” IAF Latin America Coordinator Leopoldo Martínez added.The group also discussed the assassination of Argentinean prosecutor Alberto Nisman last year. Congressman Waldo Wolff, the former vice president of Argentina’s Jewish community’s umbrella organization, addressed the lawmakers on the topic and the mood in his country.Several days before the summit, the Argentinean government determined that Nisman’s death was an assassination rather than suicide, paving the way for a deeper look into Iran’s connection to the murder. Nisman was preparing to charge Argentina’s then-president, Cristina Fernandez Kirchner, with working to cover up Iran’s role in the 1994 bombing of the Jewish community center in Buenos Aires (AMIA).Wolff said the revelation could create greater independence for Argentina and other Latin American countries from Iranian influence.