Latin American schools to collaborate with Hebrew U

“We discussed the possibility of establishing cooperative relationships with our university and the University of Jerusalem and we were quite concrete." 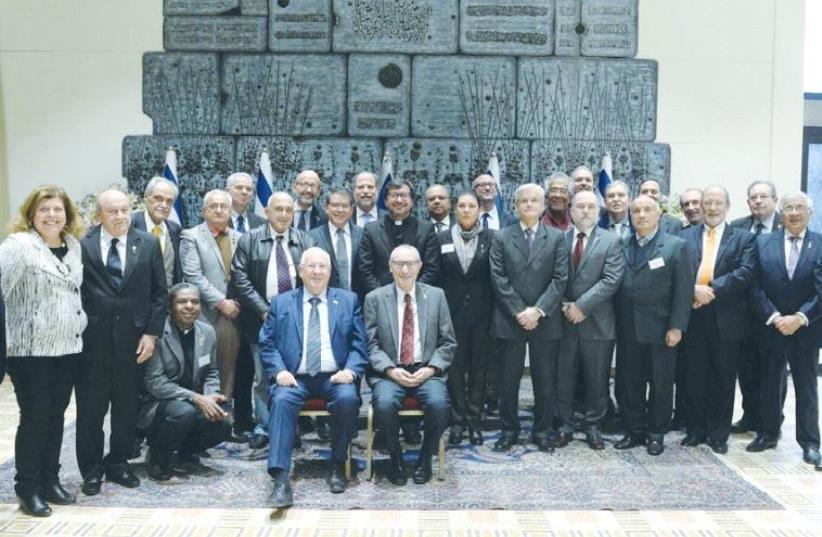 PRESIDENT REUVEN RIVLIN and Hebrew University President Menachem Ben-Sasson (also seated) meet with heads of Latin American universities in the capital.
(photo credit: MARK NEYMAN / GPO)
Advertisement
A delegation of 20 rectors from leading Latin American universities visited the country this past week, in a first-of-itskind conference at the Hebrew University of Jerusalem.The conference was organized by the university’s Harry S. Truman Research Institute for the Advancement of Peace and the Foreign Ministry.The delegation included rectors from 14 countries: Argentina, Brazil, Chile, Colombia, Costa Rica, Dominican Republic, Ecuador, Honduras, Nicaragua, Paraguay, Peru, Uruguay, Bolivia and Venezuela. The latter two nations severed diplomatic ties with Israeli in 2009, and Nicaragua suspended relations in 2010.“This visit is the first in the history of the university, and a first in the history of Israel that such a large number of rectors arrived, which represent so many campuses and students,” Naama Shpeter, executive director and the conference organizer at the Truman Institute, told The Jerusalem Post.The delegation toured Jerusalem and Tel Aviv, met with President Reuven Rivlin and high ranking government officials and learned about Hebrew University academia and research, signing some 20 cooperation agreements with the institution.“It is very rare to see 20 rectors from leading universities who come here who not only announce that they want collaboration with the [Israeli] university, but also sign academic collaborations,” said Shpeter.“There are rectors from three countries that we don’t have [diplomatic] ties with, and not only did they come to Israel but we also signed academic collaborations with them,” she said.Shpeter explained that rectors in Latin American universities have a lot of political influence, as many go on to political careers. She said she hoped their visit would lead to collaborations in academia and strengthen ties between Israel and Latin American countries.“As a university we want to strengthen the academic collaborations, but when the rectors come to Israel and tour around and meet people and see the technological innovations, then of course we hope it will bring the relations [between our countries] closer,” she said.Hector Floriani, rector of the National University of Rosario in Argentina, told the Post that he was “very enthusiastic” about the possibility for collaboration.“We discussed the possibility of establishing cooperative relationships with our university and the University of Jerusalem and we were quite concrete,” he said. “We had the opportunity to understand what they are doing in different fields in research and above all in the application of the results of research for innovation – a subject we are very interested in.”Floriani visited the country once before, more than 20 years ago. This time his visit was much more comprehensive, as he was able to “see how advanced” Israel is in applied science as well as meet with the upper echelons of the government to gain a better understanding of the Middle East.“In Israel I feel a sense of freedom, of people thinking differently,” he said. “People can coexist in freedom and are respected, and democracy is a main aspect of this society.”When asked if he encountered any opposition to his visit, Floriani, whose university includes 12 faculties and more than 80,000 students, said he had “not received any direct counsel” not to visit the country.“I can’t deny that there are some prejudices and in some cases people don’t know the reality, but I think the only answer is to be clear, to inform, to make the truth be known to everyone, and I think this is the best remedy for this problem,” he said.“Argentina has mature and respected diplomatic relations with Israel,” as well as a “very large and important Jewish community,” Floriani said.He said that he hoped the visit would further “enhance the good relationships between our two countries and in particular between our universities.”