Lawyer for owner of wedding hall where woman was killed by light structure: This was an act of God

The light fixture that fell to the floor at the “Adia” wedding hall in Yavneh struck and killed 54-year-old Aviva Hayun leaving more than 20 other people injured. 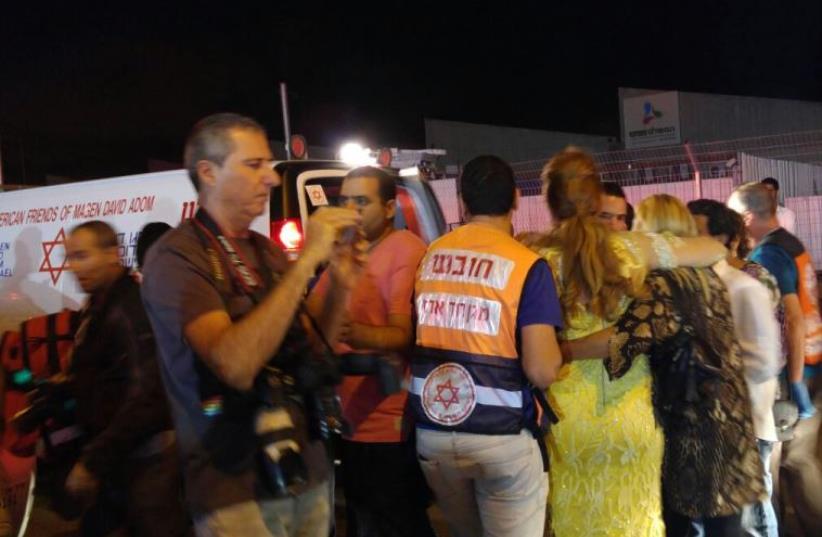 One dead, 21 others transported for treatment after chandelier collapse in Yavne
(photo credit: MDA)
Advertisement
A wedding hall where a woman was killed by a falling light structure Monday night was operating without a permit from the local municipality, a spokesman from the Yavne City Hall said Tuesday.The light fixture that fell to the floor at the “Adia” wedding hall in Yavneh struck and killed 54-year-old Aviva Hayun and left more than 20 other people injured, including 4 who were moderately hurt.According to Ariel Heller, the spokesman for the city of Yavneh, the building had permits, but not to operate as a business. Heller said the owners submitted a request for a business permit but still had not met the requirements of receiving a business license because the business did not gain approval from the Health Ministry. Heller said the municipality has for the past few months been pursuing legal procedures against the owners and that the Rehovot Magistrate’s Court has yet to issue a ruling on the matter.Heller said they did receive permits from the fire department and the police however and that regardless, the internal lighting system and any other design features inside the establishment did not require outside approval.Hours after the tragedy, the Central District police said they had begun questioning the owners of the wedding hall under caution, on suspicion of negligent manslaughter. They said they had also questioned under caution an engineer who worked as a safety consultant for the wedding hall and a member of the staff. In addition, they said they had gathered testimony from 14 of the wounded, as well as an architect and one of the employees who operated the lighting system. They also confiscated the CCTV footage as well as footage from the wedding photographer.Police and the owners also reached an agreement on Tuesday to close the business for the next 30 days, until further exams can be carried out.Attorneys for the owners pointed out Tuesday afternoon that police themselves inspected the establishment and gave them permit months earlier.Avi Hemi, one of the attorneys representing the owners, said that the wedding hall had all the necessary permits and that “they opened the wedding hall after using all of the best professionals in the business.”He added that Monday night’s tragedy was a “difficult and severe incident caused by a higher power” and that his clients weren’t responsible.Aviva Hayun, a married mother of three, was buried Tuesday evening in a ceremony at Moshav Emunim near Yavneh.