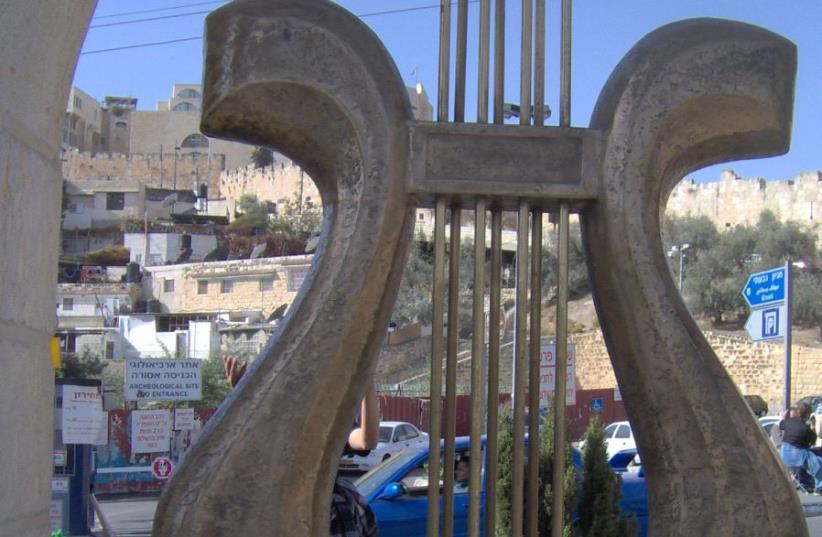 A harp of King David at the entrance to the City of David in Jerusalem
(photo credit: WIKIMEDIA)
Advertisement
Emek Shaveh, a left-wing consortium of archeologists and activists that has repeatedly condemned the “Judaization” of east Jerusalem, criticized the selection of Ir David Foundation chairman David Be’eri as one of this year’s Israel Prize winners.Be’eri, who founded the right-wing NGO, also known as Elad, has renovated the City of David from disrepair, transformed the Silwan parking lot into a major archeological site and continues to legally purchase Arab property in east Jerusalem to help relocate Jews there.Education Minister Naftali Bennett announced that Be’eri will receive the 2017 prize for lifetime achievement. Agnes Keleti, a Holocaust survivor and winner of 10 Olympic medals in gymnastics, will be awarded the prize for Sport and Physical Culture.Bennett lauded Be’eri as among the “greatest builders of modern-day Jerusalem.”However, on Sunday, Yonatan Mizrahi, the executive director of Emek Shaveh, who has filed numerous petitions to the High Court to prevent Ir David’s ongoing activities in Silwan, said the organization is a thinly veiled mechanism to change facts on the ground in east Jerusalem.“He and the Elad organization understood the power of archeology in making people excited,” said Mizrahi by phone.“So basically, he decided to reach the public politically through archeology.”Moreover, Mizrahi said that by honoring Be’eri for his work with Elad, the politicization of archeology in Silwan will continue, aided by the government.“Unfortunately, from a political point of view, they are using archeology to present Jerusalem as culturally only belonging to the Israeli people, which will definitely lead us to a dangerous situation when it comes to the political solution in Jerusalem,” he cautioned.“It’s another example of the blindness of Israeli society, which only sees part of the story, but definitely not the whole context and complications of Jerusalem. It’s another step to the Right, where we see Israel has been going for quite a while.”Not so, said celebrated archeologist Dr. Gabriel Barkay, cofounder and co-director of the Temple Mount Sifting Project, as well as a Jerusalem Prize laureate, who said Emek Shaveh is misguided in its criticism of Be’eri.“I think Be’eri is a pioneer,” said Barkay on Sunday. “When I was in the City of David 20 years ago, which is the ancient core of Jerusalem, places were neglected and inaccessible, and I was the only visitor. Now, there are hundreds of thousands of visitors.”Through Ir David, Barkay said Be’eri single- handedly turned the once languishing historic site into a polished tourist attraction.“He has diverted budgets to the area, as well as the public interest, and brought to the City of David so many visitors by promoting archeological excavations there,” he said. “This is his achievement.”Asked to address critics, such as Emek Shaveh, who contend that Be’eri is “Judaizing” the historic site at the expense of Muslim and Christian history, Barkat bluntly said nothing could be farther from the truth.“It’s stupidity to say that,” he said. “The City of David was the ancient core of Jerusalem, and Muslims and Christians were not there then. The presence in later periods of Muslims and Christians, which were there, is not omitted. People can go and see it; findings from the Byzantine and Roman periods remain in the City of David.”Barkay added: “Be’eri is not changing reality. What’s there is there. He didn’t plant any [Jewish] antiquities there.”Be’eri welcomed the prize as “another important step in strengthening the connection between the State of Israel and the Jewish people to our legacy in Jerusalem.”“Today, the City of David is growing and expanding, penetrating into the hearts of our nation,” he said. “This achievement is the result of the efforts of a group of dedicated people, as well as millions of supporters of Jerusalem, who have joined us over the years.”