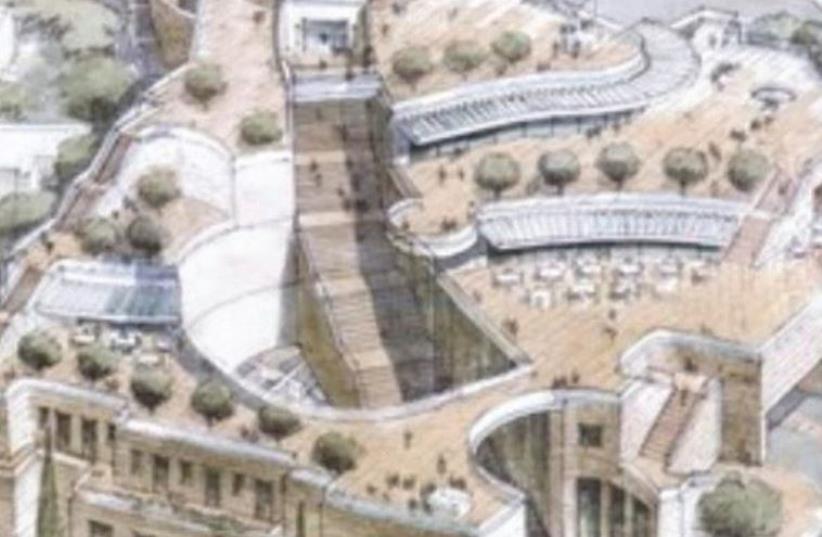 AN ARTIST’S rendering of the contested Kedem Center
(photo credit: ELAD)
Advertisement
Despite considerable pressure from the left-wing NGO Emek Shaveh to radically downsize the contested Kedem Center, being built by a right-wing group near the Old City walls at the entrance to Silwan, Emek Shaveh leader Yonotan Mizrahi said it was unlikely that the opposition would succeed.“We got the feeling that they will approve what has already been approved for the center,” Mizrahi said following a Tuesday morning hearing by the National Planning and Building Committee.Last May, the committee approved a scaled-down version of the controversial 16,000-square meter visitors’ compound, to be operated by the Ir David Foundation (Elad) over an active excavation site.While the foundation, which operates the City of David National Park, contends that the compound – located south of the Dung Gate and over the so-called Givati parking lot – will be instrumental in drawing tourists by housing ancient archeological findings, the leftwing group denounced it as destructive.Emek Shaveh has repeatedly filed petitions to block the center since its inception, claiming that it would result in “destruction and damage to the fabric of ancient Jerusalem” by harming relics located under the building, while contributing to the “Judaization” of east Jerusalem.Meanwhile, the Ir David Foundation – which intends for the structure to serve as the entryway to the Jerusalem Walls National Park, including the City of David, Mount Zion and the Ophel and Hulda Gates – said the center would strengthen the capital by celebrating its shared history.According to Mizrahi, who said the final decision would likely be announced in the coming days, Tuesday’s hearing stemmed from political pressure by the justice minister and other officials.“In our understanding, the complex, planned as a mallsized visitor center, will not only damage antiquities and the historical character of Jerusalem, but is a major factor in Elad’s political struggle to strengthen Israel’s hold over the Temple Mount in east Jerusalem,” he said.Elad has patently denied Mizrahi’s claims, calling them outlandish and unsubstantiated.