The most interesting and important voices from Israel and the Jewish world come together in the Big Apple. 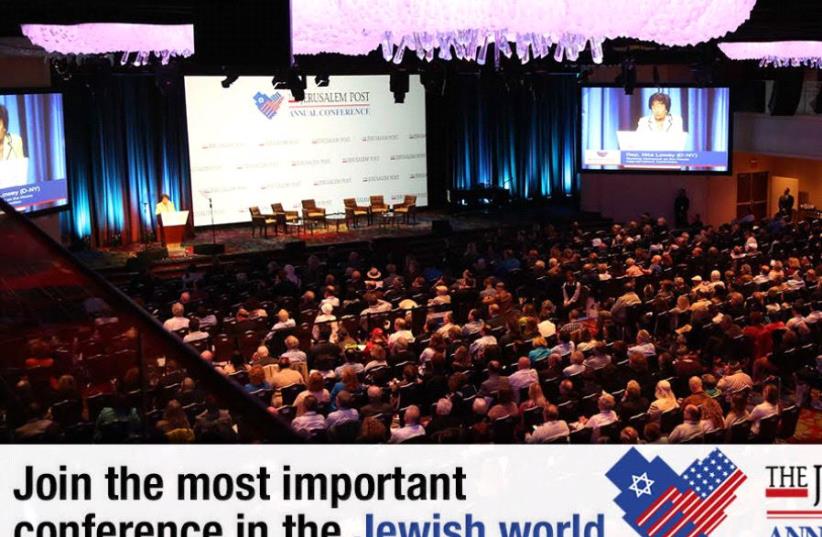 JPost Annual Conference
(photo credit: JPOST STAFF)
Advertisement
The Jerusalem Post Annual Conference in New York kicks off at 4 p.m. Israel time on Sunday with a star-studded lineup that is sure to make headlines in Israel and the US.Six senior government ministers will be at the Marriott Marquis Hotel in Manhattan, including Defense Minister Avigdor Liberman, Justice Minister Ayelet Shaked and Intelligence Minister Israel Katz.Opposition leader Isaac Herzog will be on hand to provide an alternative viewpoint and world-renowned legal expert Alan Dershowitz will provide insight into the legal issues facing Israel in world forums.Dr. Sebastian Gorka, senior adviser to President Donald Trump, will be on stage to talk to Post Editor-in-Chief Yaakov Katz about the recent controversy regarding his past and the rumors surrounding his future at the White House. Legendary journalist Larry King will also be on hand to receive a lifetime achievement award and answer Katz’s questions about his illustrious career.The conference will feature a special panel with two generals who served in recent years as IDF chief of staff – Moshe Ya’alon and Dan Halutz. They will review Israel’s strategic standing in the Middle East and identify ways the country can ensure it is prepared for the security challenges that loom on the horizon.World Jewish Congress chairman and the conference’s president, Ronald S. Lauder, will speak on the challenges facing the Jewish people around the world, and a special panel with representatives from across the Jewish spectrum will talk about religious freedom in Israel, touching on issues like prayer at the Western Wall, conversions and civil marriage.Over the last six years, the conference has turned into a vital forum that opens a window for our readers into Israel by connecting them directly with the politicians, government officials and IDF officers who make the news as well as the journalists who report on it. And it makes news! The conference stage has been the scene of arguments between Meir Dagan, the late and legendary Mossad chief, and government ministers about the role he played in preventing Prime Minister Benjamin Netanyahu from taking unilateral military action to stop Iran’s nuclear program.At last year’s conference, the soldout audience was treated to a speech by Mosab Hassan Yousef, better known as the Green Prince, the son of a top Hamas terrorist who became one of Israel’s most important intelligence assets.In addition, the conference has been the setting for speeches from and talks with former presidents, prime ministers, Hollywood stars such as Michael Douglas and famous sex therapist Dr. Ruth, as well as senior members of the Israeli and American administrations.The conference will be streamed live on www.jpost.com beginning at 4 p.m.